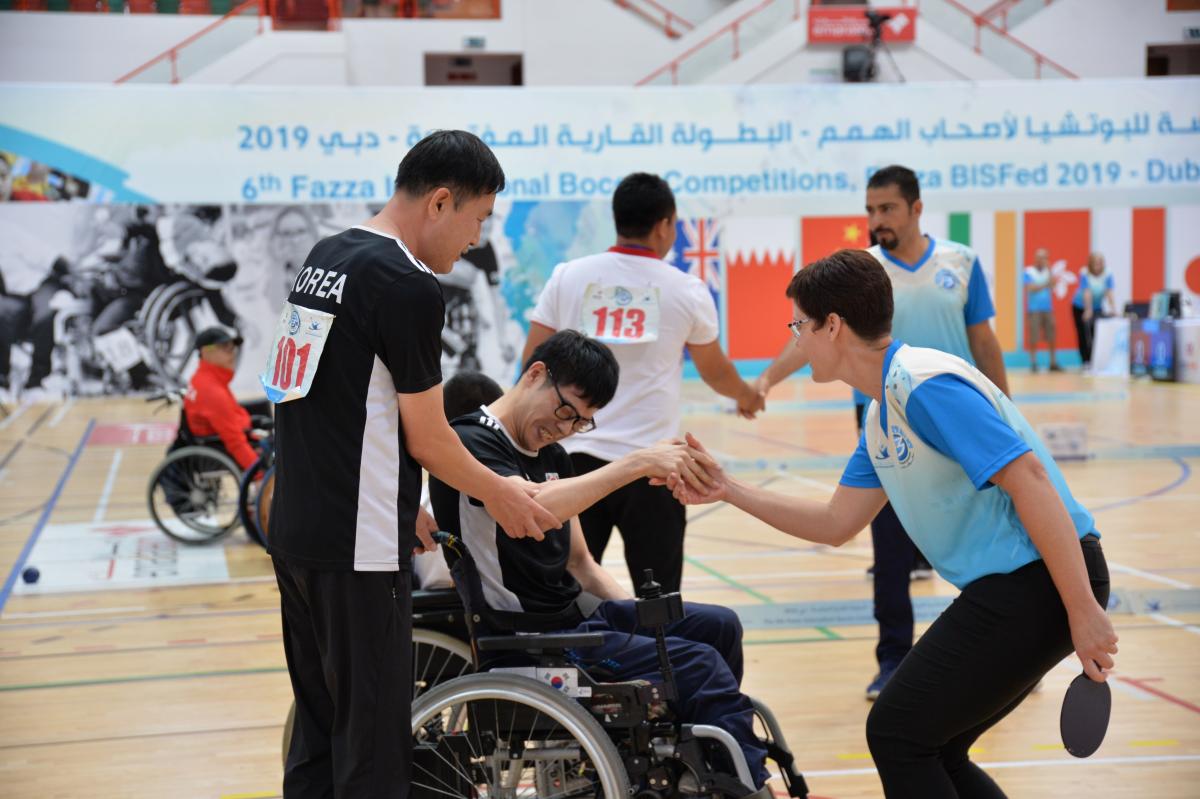 South Korea’s Youngjin Roh and Yongjin Lee clinched the Individual gold medals in BC1 and BC2 finals respectively at the 6th Fazza Boccia 2019 Championships held at the Shabab Al Ahli Club in Dubai.

Later, in the BC4 category, Seongyuk Jang settled for silver while Yejin Choi and Hyeon Seok Seo claimed bronze in BC3 and BC4 events, respectively.

In a dramatic BC1 final, Roh, a rookie and Seoul Regional Championships gold medallist, rallied from behind to beat Indonesia’s Muhamad Syafa 4-3.

Trailing 1-3 until the last minute, the Korean got the better of Syafa on his last throw. Malaysia’s Chew Wei Lun took bronze with a 3-2 win over Dohyun Kim of South Korea.

In the BC2 final, Lee stormed to a 5-1 win over Indonesian Felix Ardi Yudha to take the top honour.

Ximei Lin claimed the only gold for China on the day, emerging the winner in BC4 final overcoming a fighting Jang 4-2. Korea’s Seok Seo took the bronze with a 3-2 win over Hong Kong’s Yuen Cheung.

Dream debut for Indonesia
Indonesian duo Syafa and Yudha also made an impressive debut by making it to the finals of the BC1 and BC2 events. They ended up settling for silver, but the experience would have done a world of good to their confidence.

“Our main target is Paris 2024. Next year, we have the ASEAN Para Games which will be a good competition,” said Indonesia coach Islahuzzaman.

BC3 Gold- Silver for Australia
The BC3 final was an all-Australian affair with Daniel Michel overcoming compatriot 3-2 Spencer Cotie for the title.

Team manager Kristy Tannebring, speaking about his team’s showing, said: “More than the ranking points, the Championship was important in terms of the team’s preparation for the Tokyo 2020 Games.

“We are hoping that our BC3 team qualify for the Tokyo 2020. They are doing good this season and they did well here. It’s exciting that the BC3 final was between our players. Daniel has been very consistent while Spencer has great potential.”

“The sport in Australia is getting bigger and we also have support from various government organisations and the Australian Paralympic Committee,” she added.