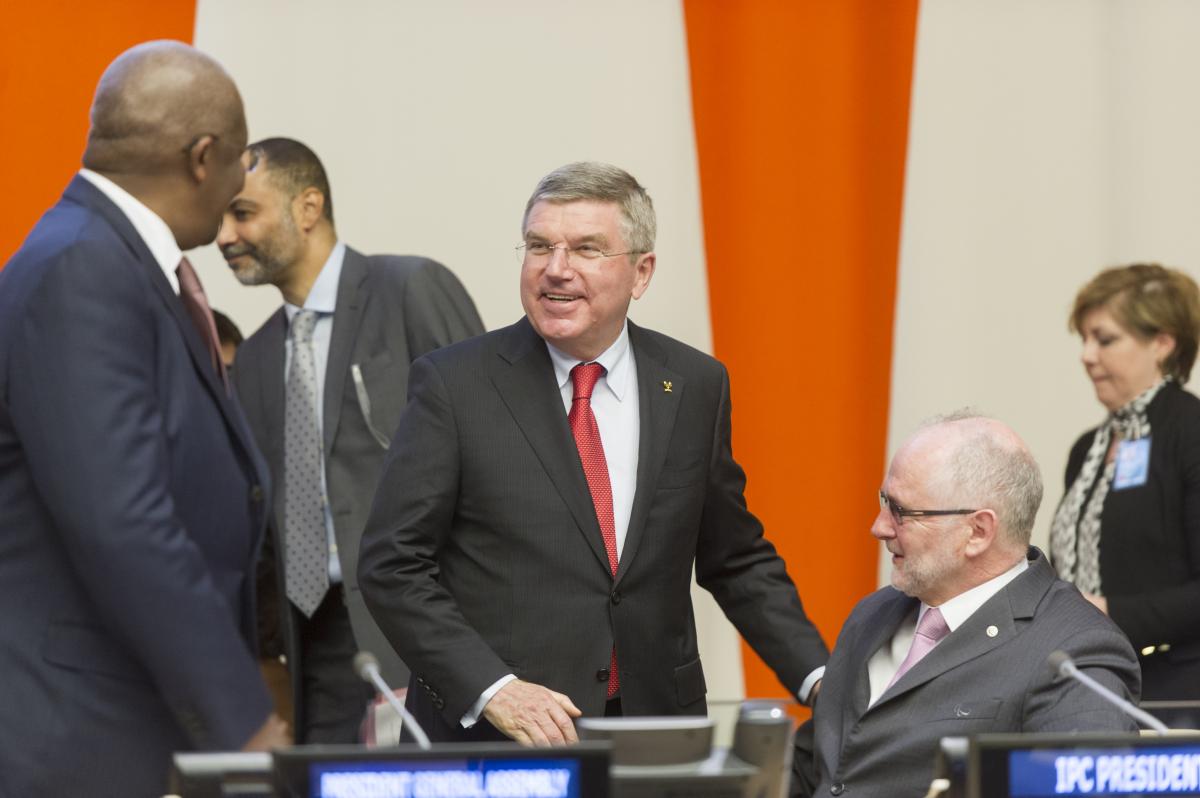 Sporting excellence is not just about medalling at the Paralympic Games. Each para-athlete has their own target of what defines sporting excellence and how their involvement in sport can transform their own life and drive equality and social inclusion in other people’s lives too.

It’s a huge pleasure to be here today celebrating The International Day of Sport for Development and Peace.

I would like to thank UN Secretary General Ban Ki-moon for my invitation to be here alongside like-minded people such as Your Excellency Sam Kutesa, President of the UN General Assembly; Dr. Thomas Bach, President of the International Olympic Committee and Wilfried Lemke, Special Advisor to the Secretary General on Sport for Development and Peace.

When I see the words development, peace and sport together, I think of how sport is life’s great educator, the impact sport can have on society, and why it is vitally important that the practice of sport for all is engrained in to every school curriculum around the world.

I know from my own experiences as a wheelchair basketball player that many precious life skills are acquired by the regular practice of sport, such as hard work, fair play, honesty and integrity.

For me sport is the antithesis of war; it improves self-discipline, respect and tolerance and leads to a greater understanding of why in life you must play by the rules. Where else can you pit two fierce rivals head-to-head in peaceful conflict other than in sport?

Through human interaction in sport you sub-consciously realise that you can be good at something, raising your self-esteem. You practice self-determination, and quickly understand that it is easier to achieve a common objective through teamwork rather than by working as a group of individuals.

Apart from the obvious health benefits, sport helps the individual to help themselves, and enables them to achieve personal freedom. It awakens their hearts, minds and souls so that they can discover with a passion their own talent.

When people realise their dreams and use the energy within their own bodies and minds to develop themselves and their nations for the good of all, then this planet will become a better and more peaceful place.

Looking at the advantages sport can bring, it makes sense to get young people active and involved as early as possible. The best way to achieve this is through school. In my view very few academic subjects can teach such a wide range of skills as sport.

Positive experiences can also educate and change perceptions of those who watch sport.

The vision of the International Paralympic Committee is “to enable para-athletes to achieve sporting excellence and inspire and excite the world.”

Sporting excellence is not just about medalling at the Paralympic Games. Each para-athlete has their own target of what defines sporting excellence and how their involvement in sport can transform their own life and drive equality and social inclusion in other people’s lives too.

Charles Okwanga is a 26-year-old Ugandan. He lost both his legs stepping on a landmine 18 years ago whilst walking to school, an incident that left his life and dreams in tatters.

That is until two years ago when he took up wheelchair basketball thanks to an initiative from the Agitos Foundation, the IPC’s development arm. Charles says sport changed his outlook on life and life’s outlook on him.

“I believe I am not disabled,” he said. “Thanks to para-sport people in my community look at me differently; they consider me special and important. Now I can go back to school and achieve my dream of becoming a social worker, to give back to my community and improve the situations of people with impairments.”

Another wheelchair basketball player, Donna Ritchie, captained the Australian women’s team in Sydney in 2000. She epitomised the transformational power of Paralympic athletic performance when she said: “Paralympians don’t have time to worry about what doesn’t work, they just maximise what does”. Her words can be used for everyone throughout the world. Realise and maximise your potential through practising sport.

Chinese Paralympic gold medallist Tao Zheng has no arms but can still swim 50m freestyle using just his legs in under 30 seconds! Just think for a moment how amazing that is.

Zheng, like many other Paralympians, is an example of how world class performance at the Paralympic Games can transform society’s view on a subject.

Following the Beijing 2008 Games, a leading Chinese governmental official said: “Thanks to the Paralympics, the image of people with a disability in China is no longer one of a garbage collector or of a beggar, but of a football player, a long jumper or a shooter.”

Some people say do not overestimate the positive effect that sport can have on society. I say just the opposite – do not underestimate it.

According to London 2012 research, roughly 20 million people felt the Paralympics delivered a breakthrough in the way people with an impairment are viewed in Great Britain.

In my opinion, no other sporting event in the world can deliver such seismic shifts in attitudes or drive social inclusion as well as the Paralympic Games. Thanks to our tremendous partnership with the IOC, which involves staging the Paralympics immediately after the Olympic Games in the same city, the Paralympic Movement has developed a track record for building a bridge which links sport with social awareness.

Although the UN Convention on the Rights of Persons with Disabilities has achieved much since its adoption in 2006, collectively we can accomplish even more.

Together we need to embark on a long-term programme of education where sport and activity play a key role in, as Donna Ritchie said, encouraging people to maximise their development of what they possess, not worrying about what they don’t.

Only by doing this can the Paralympic Movement achieve its ultimate aspiration “To make for a more inclusive society for people with an impairment through sport.”