Stirling 2019: Latvia lead from the front 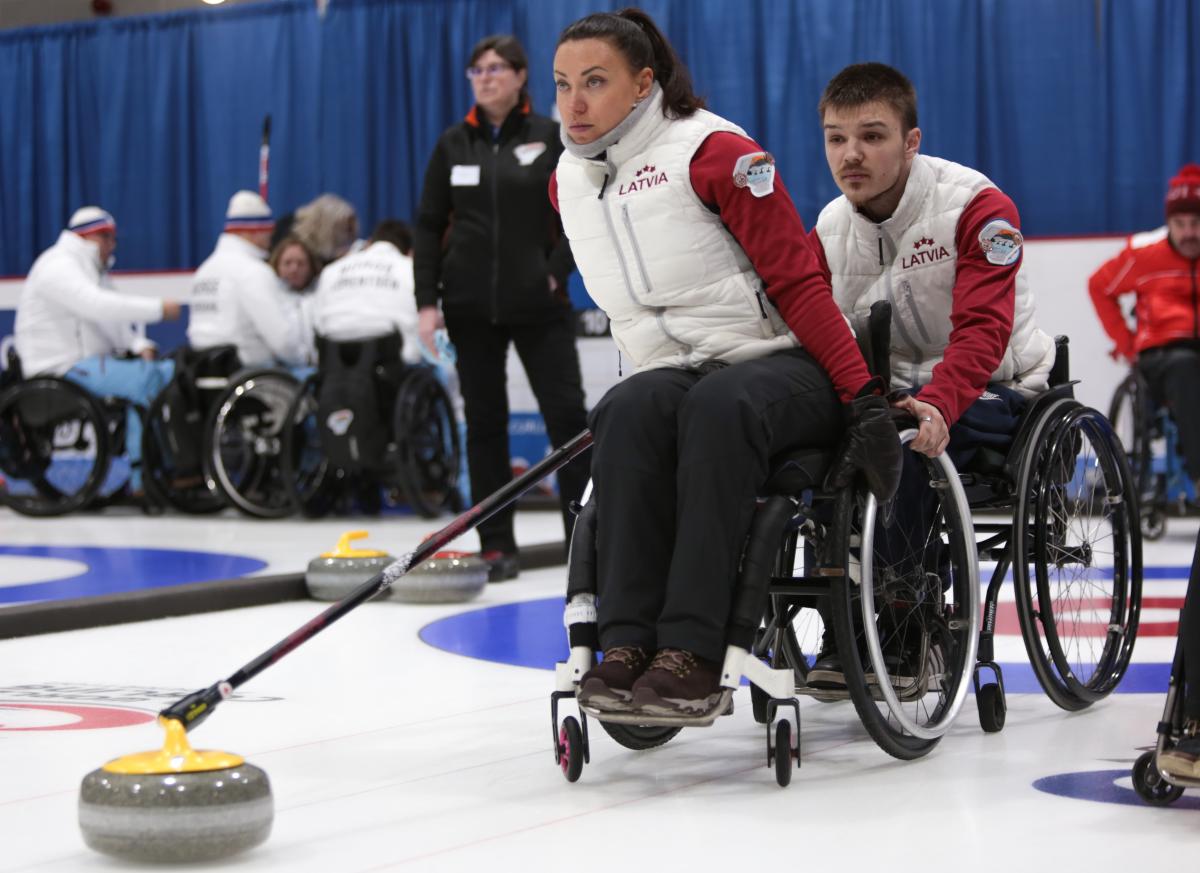 The race for the play-offs of the World Wheelchair Curling Championship 2019 in Stirling, Great Britain, heated up on Wednesday with several teams still in the running. Paralympic champions China, world champions Norway and Worlds first-timers Latvia share the top spot in the standings. Russia*, Scotland and Switzerland also remain in a strong position for one of the six play-off places.

The day saw Germany tally their first win, beating Switzerland 7-2 with their best performance of the championship so far.

“After five losses it’s very hard to come back every day and try to give your best,” Germany’s skip Christiane Putzich said.

“It was very difficult in the morning today, but we were very focused and tried to keep the play very easy, concentrate on every shot and it worked.”

It was the second of two losses in a day for Switzerland, who had had an outstanding first three days of competition. They were also beaten 3-7 by Latvia.

Although the Swiss won the first end, Latvia scored two points in the second and fourth ends to take a 4-3 lead into the break. In the second half of the match, Latvia stole single points in the fifth, sixth and seventh ends on the way to their fourth win.

The Latvian dream of a play-off place continued in the evening after they beat Germany 9-2.

Canada continued their resurgence from a poor start to the tournament. They defeated Slovakia 8-7, a thrilling match that saw them steal two points in the eighth end.

Canada maintained their form when they played strongly against Russia. Although Russia won a point in the seventh end, they were still trailing 3-6 and conceded the match.

“You know you’ll always get a great game against Russia and I love playing against them,” said Canada’s skip Mark Ideson. “They bring the best out in us. We had fun tonight and stayed loose and played well.

“We’re certainly not out of the woodwork yet. We’ve still got some work to do. Losing your first four is not ideal. The momentum has certainly shifted our way which will help.”

The 2017 silver medallists Russia however did clinch a win earlier in the day as they survived a clash with Slovakia, winning 8-4 after taking five points in the sixth end.

Slovakia were unable to get any of their draws into a shot position in that end, and conceded after the seventh.

Hosts still in the fight

Norway shrugged off day three’s loss to Scotland by beating Estonia 6-2. But South Korea became only the second team to beat the defending champions after.

Norway were only able to score one point in both the fourth and sixth ends, and conceded after the seventh end when South Korea’s two points put them too far ahead to win 6-2.

China bounced back from their first two losses on Tuesday to earn a 7-3 win over Scotland before going on to beat the USA 9-5.

The USA also fell to Scotland on Wednesday, after the hosts survived a fight-back from their opponents to win their fourth game 7-6.

Scotland led 4-1 going into the fourth end. But a score of two points from the USA in that end, followed by single point steals in the fifth, sixth and seventh ends gave the USA the lead. However, Scotland scored three points in the last end to secure the win.

Two days remain of the round-robin stage and each nation has another four matches to play. The third- to sixth-ranked teams will then take part in play-offs to determine who will meet the first- and second-ranked teams in the semi-finals.