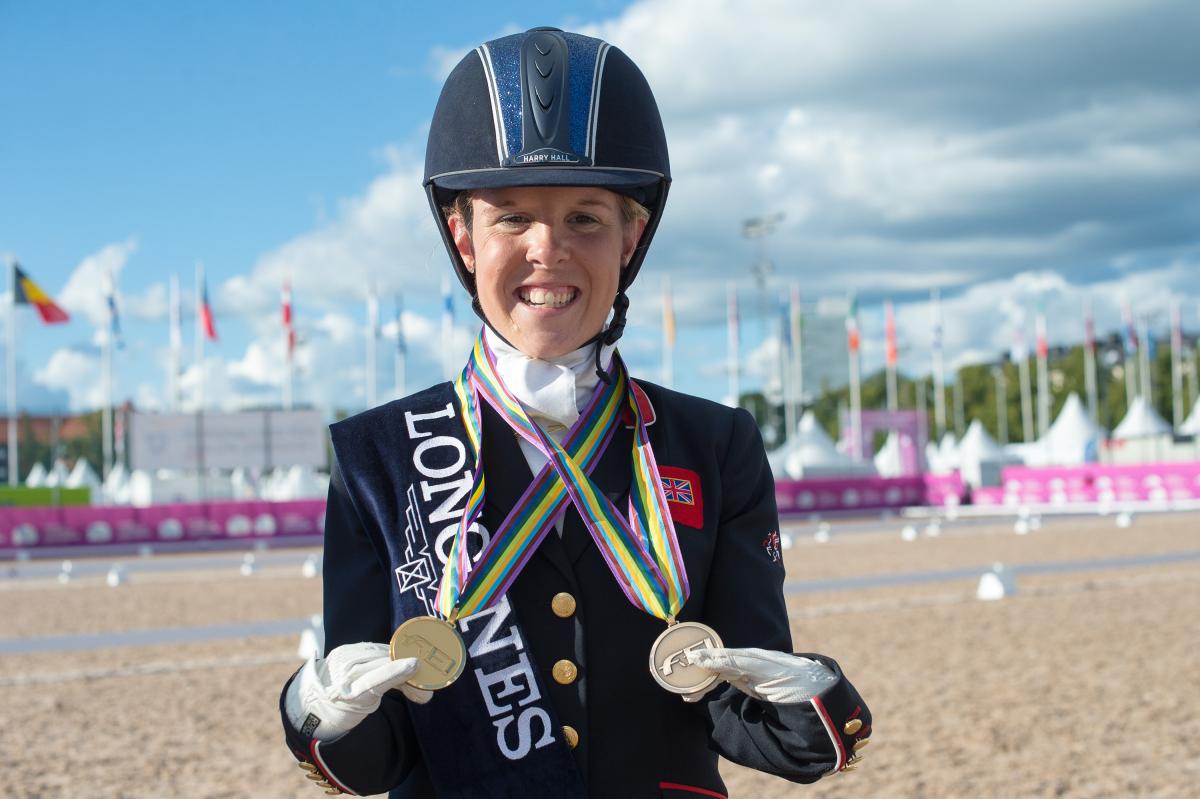 “I got a taste for big competitions, and wanted to be on the team again. I needed to prove to myself it wasn’t a fluke and it’s really nice to be back.”

Erin Orford’s wait is finally over, as the British rider learned she was selected to compete at the 2018 World Equestrian Games that begin exactly one month from now on 18 September in Tryon, USA.

The 29-year old grade III rider was first reserve on her team for the 2014 World Equestrian Games (WEG) in 2014, the Rio 2016 Paralympic Games, and last year’s European Championships.

First reserve means that the rider and horse have to be on standby right up until the competition starts. At the 2017 Europeans, Orford’s state of preparedness was tested when she was called up to compete at the last possible minute.

“There was no time to prepare, “she said. “I literally had to drop everything and hope for the best!”

But it was not a wasted journey to Gothenburg, Sweden. She helped Team GB win the coveted team title (and maintain their unbeaten record at world, European and Paralympic Games), and picked up an individual bronze medal.

It helped her case for Tryon 2018, which will be the first time she has made the first cut in a major international competition

“It’s a massive relief to be selected though as there are so few spaces,” Orford said. “The British team is so competitive, I knew we’d had a good year and stepped up the quality of work so it was just a case of waiting to see if we’d done enough to make the cut.”

After Gothenburg, Orford felt that the pressure was on this year to do it again.

“I got a taste for big competitions, and wanted to be on the team again,” she said. “I needed to prove to myself it wasn’t a fluke and it’s really nice to be back.”

Her inspiration to seriously concentrate on the sport came after attending the Athens 2004 Paralympics, on the suggestion of a neighbour who was a member of Team GB’s wheelchair basketball team at the time.

“That was so inspiring,” Orford remembered.

Orford is a double bi-lateral amputee through the knee and has four fingers on each hand. Her entry to the sport was via Great Britain’s Riding for the Disabled organisation.

“I started when I was really little, and then I had a bit of a gap in my teens making the transition from therapy to the sport side, and now I train with Stephen More in the South East of England,” Orford said.

Orford’s partner in the arena is Dior – a 15-year-old chestnut mare.

“She’s a sensitive horse - she has to be,“ she said. “I don’t have much use of my legs and can’t use too much rein either but we have built up her confidence and our partnership over the years and now she loves the attention and enjoys a big occasion. Like any mare, once she’s on your side she’s with you 100 per cent.”

Between training and gym work, Orford also works part time in digital communications for a charitable foundation which supports a wide range of social initiatives including disability sports, as well as teaching riding.

Now though, her focus is on the WEG.

“I go into every competition to win, but WEG will be a very high standard,” she said. ”I just want to show Dior at her best – everything else is out of my control.”