USA's men's wheelchair basketball team followed up their bronze-medal finish at London 2012 by winning the 2013 Americas Cup in Bogota, Colombia.

ⒸCopa America BSR 2013
By Nate Williams | For the IPC

There were only four spots available to the Americas for the 2014 World Championships, meaning that only the finalists will travel to the city of Incheon where the tournament will be held between 1-12 July next year.

For the first time in their history, reigning Paralympic champions Canada failed to qualify for the men’s wheelchair basketball World Championships, while IWBF Americas Cup winners USA, Argentina, Mexico and Colombia will represent their continent in South Korea next year.

There were only four spots available to the Americas for the 2014 World Championships, meaning that only the finalists will travel to the city of Incheon where the tournament will be held between 1-12 July next year.

The USA earned their qualification by winning the tournament in Bogota, Colombia, going undefeated and rounding off their trip with a 61-36 victory over Argentina. Meanwhile, Mexico won their battle for the bronze medal with Colombia as they claimed a 71-52 result.

However, for Canada, their journey ended at the quarter-final stage even though they advanced as the second-placed team in Pool B with only one opening upset to Argentina on the opening day.

In the closing moments of their matchup with Mexico, they lost by 10 points while USA made light work of Puerto Rico, Colombia defeated Venezuela by 20 points and Argentina overcame neighbours Brazil by a 69-54 result.

Paralympic bronze medallists USA continued their relentless intensity in the semi-finals, as they stormed into the championship game with a 69-42 victory over Mexico.

Argentina made amends for their earlier 60-51 loss to Colombia in Pool B with a commanding performance to secure a meeting with the undefeated USA in the final.

However, the Argentinians did not manage to cause an upset this time as the USA continued their fantastic form and cruised to a gold medal victory.

Jared Arambula led the Americans scoring with 13 points will Argentina’s star players for the tournament Carlos Esteche and Adolfo Berdrum had nine points each.

Mexico finished their impressive run in Colombia as top scorers Eduardo Prieto and Salvador Zabala scored over 20 points each to defeat the hosts and take home a bronze medal. 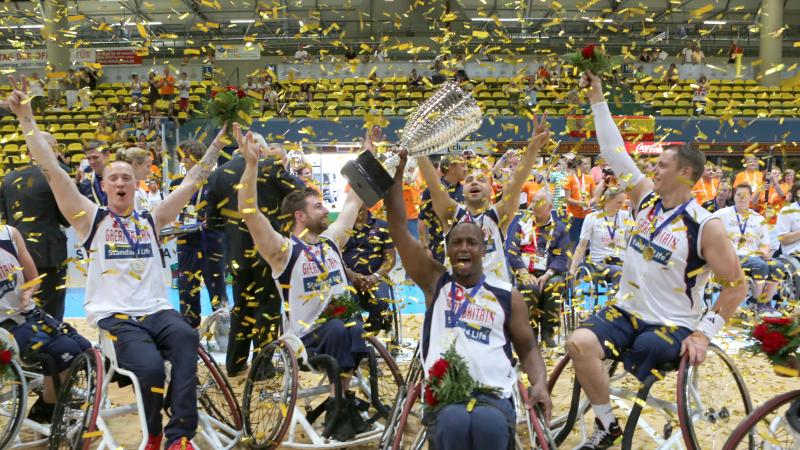