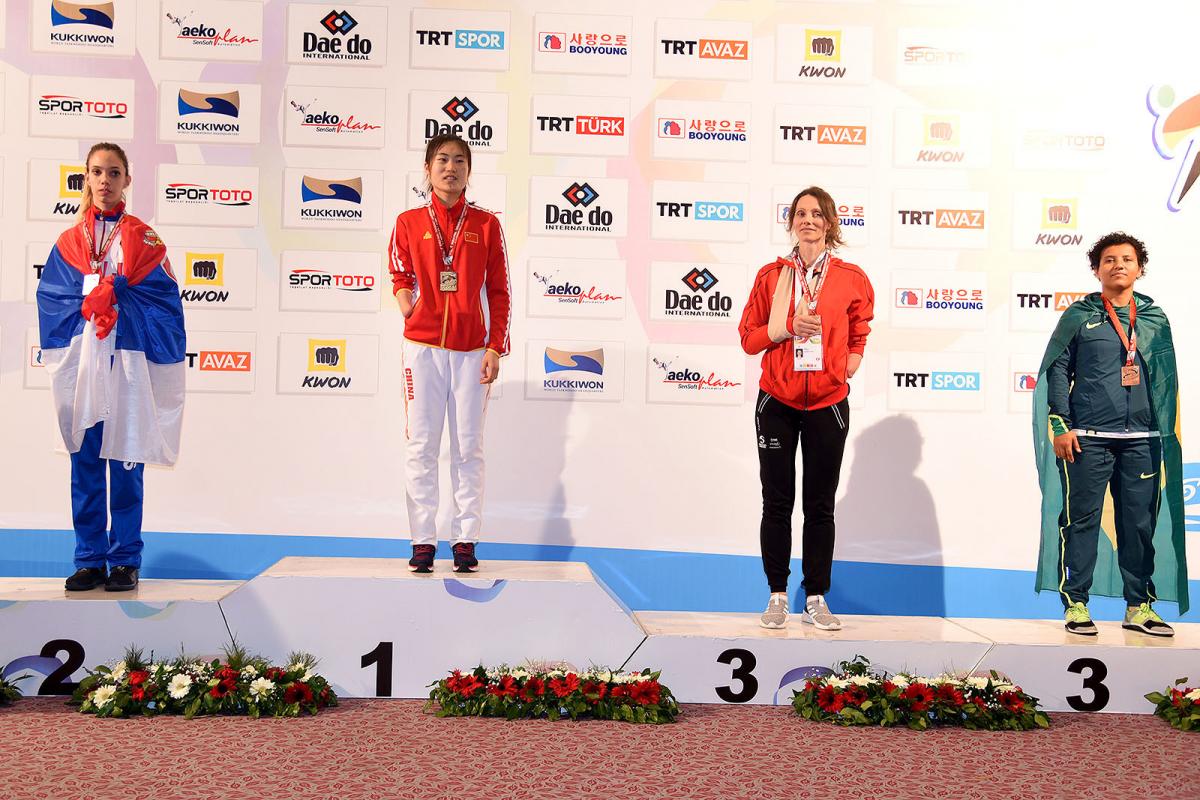 China’s Yujie Li continues adding to her superstar status by capturing her third title in four tournaments at the Asian Para Open Taekwondo Championships on Thursday in Amman, Jordan.

The result will likely see Li move into No. 5 in the rankings, just a few points from an automatic berth to the Tokyo 2020 Paralympics.

Mongolia’s former world champion Enkhtuya Khurelbaatar – ranked No. 1 in the women’s up to 49 kg K44 – got back on track with her first title of 2019. Her fourth straight Asian title puts her in good position for Tokyo 2020.

Iran’s former world champion Mahdi Pourrahnama showed he is the one to beat at Tokyo 2020 by taking down the competition in the men’s up to 75 kg K44 division by a combined score of 78-10 on the way to his fourth straight Asian title.

His win will vault him into the division’s top four and in a golden position to automatically qualify for next year’s Games.

Ranked No. 43 coming into the tournament, Joo impressed by knocking off the No. 3, No. 4, and No. 7 seeds on the way to his most impressive performance yet.

Great Britain’s world No. 1 Amy Truesdale strengthened her position in the women’s over 58 kg K44 division by capturing her second title of 2019.

With her third straight silver and fifth podium of 2019, France’s Laura Schiel has put herself in the upper echelon of the over 58 kg division.

Turkey’s No. 4-ranked Ali Can Ozcan showed incredible form by topping the men’s up to 61 kg K44 tournament, handing Mongolia’s No. 1-ranked world champion Bolor-Erdene Ganbat just his second-ever defeat in the semi-final.

Ozcan beat Italy’s Antonino Bossolo in the final, but his silver medal should move him into a virtual tie with Spain’s Aythami Santana Santana for the final qualification spot in the division, with the European Open Championships still to come in October.

With the Asian Championships now in the books, there is just one G-4 / G-2 event left for fighters to gain ranking points. The European Championships will be held in Italy on 31 October.

Fighters from the Americas have one additional tournament to gain points when Para taekwondo makes its Parapan Am Games debut in Lima, Peru, next month.