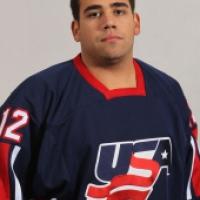 When and where did you begin this sport?
He began playing ice hockey in 2008 with the Colorado Avalanche club in the United States of America.
Why this sport?
He wanted to do something as part of the rehabilitation from his accident, and he was invited to try the sport by a coach.
Club / Team
Colorado Avalanche: Denver, CO, USA
Name of coach
Guy Gosselin [national], USA
Preferred position / style / stance / technique
Defence

Hobbies
Weightlifting, reading, fishing, shooting, cooking, wakeboarding, skiing. (teamusa.org, 2017)
Memorable sporting achievement
Winning gold at the Paralympic Winter Games in 2010 and 2014. (Athlete, 29 Mar 2018)
Most influential person in career
His parents. (Athlete, 29 Mar 2018)
Hero / Idol
Canadian ice hockey player Joe Sakic. (Athlete, 29 Mar 2018)
Sporting philosophy / motto
"I don't like to be second or last. I just want to be first." (thesteadfastfoundation.org, 15 Sep 2015)
Awards and honours
In 2017 he received a Medal of Courage from the Colorado Chapter of the National Wrestling Hall of Fame in the United States of America. (reporterherald.com, 11 May 2017)
Other sports
He won a silver medal in mono-skier X at the 2016 Winter X Games in Aspen, CO, United States of America. (paralympic.org, 01 Feb 2016)
Impairment
In 2007 he was travelling home from a school dance with his friend Tyler Carron. They had stopped at the side of the road to change a tyre when they were struck by a vehicle, pinning them between two sport utility vehicles [SUVs]. Landeros' injuries led to his legs being amputated above the knee. (Athlete, 06 Mar 2014; teamusa.org, 13 Feb 2014; denverpost.com, 16 Dec 2009)
Other information
LEADER
He was named an alternate captain of the US national team for the 2017/18 season. (paralympic.org, 29 Oct 2017)

FRIENDSHIP
His friend Tyler Carron also lost both of his legs in the accident that led to Landeros' impairment. They had been wrestling teammates at high school and both went on to be members of the US national Para ice hockey team that won a gold medal at the 2014 Paralympic Winter Games in Sochi. "I played hockey most of my life. Tyler had never played hockey until after we got hurt. We went through ups and downs, both of us. More ups than downs. It's pretty wild how things happen for the better. I probably wouldn't change it if I could." (denverpost.com, 23 Mar 2014; teamusa.org, 04 Dec 2012)