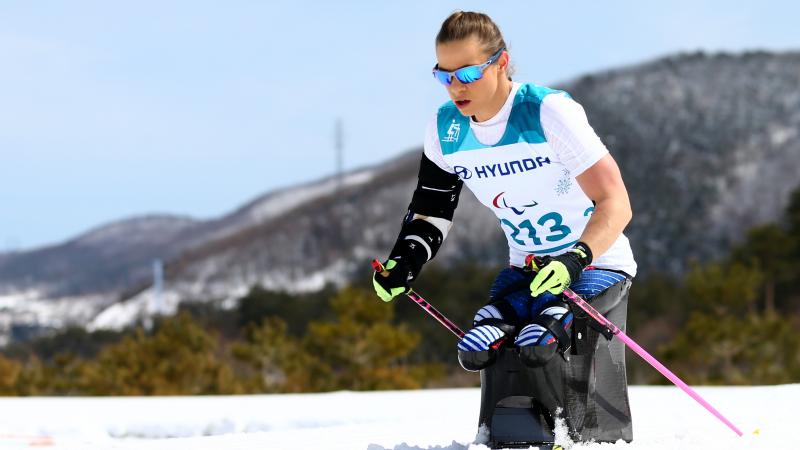 Oksana Masters is just returning to competition after an injury that jeopardised her participation at PyeongChang 2018. The US Nordic skier prefers to take it slowly, which is why she decided not to take part in all events at the 2018-19 World Cup circuit.

Only weeks before the Opening Ceremony of the 2018 Paralympic Winter Games, she dislocated her elbow and thought all her hard work would be for nothing.

With the support of her team and closest people, she recovered just in time to compete in South Korea. Despite feeling constant pain, Masters won double gold in the women’s cross-country middle distance and sprint sitting.

She followed that up with silver in the biathlon sprint and long distance, and bronze in the cross-country long distance.

In 2017, an impressive performance saw her power to the top of the podium four times at the World Championships in Finsterau, Germany - and a sweep of the cross-country events.

It also included a gold in biathlon, something which Masters herself said she could not quite believe having previously struggled with shooting. A win of the cross-country World Cup rounded off an excellent season in addition to a top three finish in biathlon.

Originally from Ukraine, Masters’ well-documented life story includes being exposed to radiation from the infamous Chernobyl nuclear power plant explosion and being sent to live in an orphanage after being born with limb impairments.

Masters started rowing when she was 14 years old after being adopted by a US woman. Soon after her bronze medal-winning performance at London 2012 with rowing partner Rob Jones, which propelled her to national fame and an appearance in ESPN’s The Body Issue, Masters decided a change of sport was needed and set about learning Nordic skiing.

In 2013, she was named to the US Paralympics Nordic Skiing Development Team.

After an incredibly successful first season on the World Cup circuit in 2013-14, finishing as world No.6, Masters got her ticket to Sochi 2014.

She went on to beat the likes of world No.1 Andrea Eskau of Germany and world No.2 - Norway’s Mariann Marthinsen - to claim silver in the cross-country long distance.

She also won bronze in the cross-country middle distance.

To round-off a whirlwind couple of seasons, Masters got the chance to compete at home at the 2015 World Championships, where she won a silver and bronze medal in cross-country events.

Nicknames
Roxy, Oops-Ana Grace, Mustafa, Oks (Facebook profile, 16 Apr 2020; teamusa.org, 14 Nov 2013; leoweekly.com, 25 May 2011)
Memorable sporting achievement
Winning two gold medals at the 2018 Paralympic Winter Games in Pyeongchang. (Athlete, 29 Mar 2018)
Most influential person in career
Her adoptive mother Gay, Nordic skiing coach Eileen Carey, rowing coach Bob Hurley. (Athlete, 29 Mar 2018)
Injuries
She fractured her right elbow three weeks prior to the start of the 2018 Paralympic Winter Games. At the time she was told she would not be able to compete in Pyeongchang, but she recovered in time to win five medals. After the Games she underwent two operations, with the second one taking place in October 2018. She returned to competition in December 2018 at the World Cup event in Vuokatti, Finland. (paralympic.org, 17 Dec 2018; teamusa.org, 26 Apr 2018; pyeongchang2018.com, 10 Mar 2018)

After the 2012 Paralympic Games in London she suffered a back injury which forced her to retire from rowing. (si.com, 23 May 2021; oksanamastersusa.com, 2017)
Sporting philosophy / motto
"To be irreplaceable one must always be different." (Twitter profile, 02 Jan 2021)
Awards and honours
She received the 2020 Laureus Award for Sportsperson of the Year with a Disability. (paralympic.org, 18 Feb 2020)

In 2018 she was named Individual Sportswoman of the Year by the Women's Sports Foundation in New York City, NY, United States of America. (paralympic.org, 23 Oct 2018)

She was named Team USA's Female Paralympic Athlete of the Games after winning five medals at the 2018 Paralympic Winter Games in Pyeongchang. (teamusa.org, 26 Apr 2018)

She was flag bearer for the United States of America at the closing ceremony of the 2018 Paralympic Winter Games in Pyeongchang. (teamusa.org, 16 Mar 2018)

She was named the 2017 Para Nordic Skier of the Year by online publication FasterSkier. (fasterskier.com, 10 Apr 2017)

She was named the 2012 United States [US] Rowing Female Athlete of the Year. (teamusa.org, 14 Nov 2013)
Other sports
She has competed at the Paralympic Games in rowing, road cycling, cross-country skiing, and biathlon. She participated in road cycling at the 2016 Games in Rio de Janeiro, and competed in biathlon and cross-country skiing at the Paralympic Winter Games in 2014 and 2018. She also won a bronze medal in rowing at the 2012 Games in London. (SportsDeskOnline, 20 Aug 2021; Facebook page, 26 Dec 2020; paralympic.org, 2017)
Milestones
She became the first athlete representing the United States of America to win a gold medal in Para biathlon at the world championships when she placed first in the 6km sprint at the 2017 edition in Finsterau, Germany. (SportsDeskOnline, 05 Dec 2018; skitrax.com, 12 Feb 2017)
Famous relatives
Her partner Aaron Pike represented the United States of America in athletics at the Paralympic Games in 2012 and 2016. He also competed in biathlon and cross-county skiing at the Paralympic Winter Games in 2014 and 2018. (fansided.com, 03 Aug 2021; SportsDeskOnline, 14 Jan 2020)
Ambitions
To win the Para cycling road race and time trial at the 2020 Paralympic Games in Tokyo. (bbc.co.uk, 14 Jan 2020)
Impairment
She was born with tibial hemimelia, which meant her legs were different lengths and did not have shinbones. She also had five webbed fingers without a thumb, six toes on each foot and only one kidney. Both of her legs were amputated above the knee, one at age nine and the other at age 14. (uoflphysicians.com, 06 Mar 2014; espn.go.com, 11 Jul 2012)
Other information
UKRAINE TO UNITED STATES OF AMERICA
She was born in Khmelnytskyi, Ukraine, located just a few hours from Chernobyl, the scene of a nuclear accident in 1986. Her birth mother's exposure to radiation from living nearby is believed to have been a factor in Masters' impairment. She was abandoned at an orphanage after she was born, and was adopted by Gay Masters at age seven and taken to the United States of America. "Where I was from, they had radiation leaks. A cop [policeman] in my village would go around and say, 'Lock up,' and you boarded your windows and doors and didn't come out for a day or two to let the radiation die down. I was in a very poor orphanage so there wasn't much food. There was never enough to satisfy the hunger. I don't remember much because many memories are blocked out. I always knew that I would have a mother, I just had to wait." (uatoday.tv, 30 Oct 2015; uoflphysicians.com, 06 Mar 2014; espn.go.com, 11 Jul 2012)

SCARS AND TATTOOS
She spent over seven years in the orphanage system in Ukraine as a child, where she said she was subjected to physical abuse that left her with numerous scars. "A scar is a story that happens to you. You don't own a scar, you survive a scar. I want to own my story. That's something I've begun to discover as I've grown older, this desire I have to reclaim my body, to reclaim my life as a story that only I get to tell. To say the hard part out loud, [that] I was abused. To define it, not let it define me. Over the course of my adulthood, that desire has manifested itself in all types of ways. It has manifested itself in a love of tattoos. Tattoos, unlike scars, you get to choose. And each tattoo I have is full of so many of my own choices. Each of them represents such an important part of me. When I get a new tattoo, it's like me saying, 'I want my story told in this colour, and this size, in this location, that looks like this, and reminds me of this, and this, and this'. So, where my actual scars might reflect these moments of powerlessness, my new scars, the way I choose to mark my body up with tattoos, I feel this deep purpose in it. I feel the most amazing sense of self." (theplayerstribune.com, 29 Dec 2020)

TWO GAMES IN SIX MONTHS
She is aiming to compete in cycling at the 2020 Olympic Games in Tokyo and in Nordic skiing at the 2022 Paralympic Winter Games in Beijing. "I think what mentally drives me [to do more than one sport] is I wasn't satisfied with how I left the sport of rowing. It wasn't my choice to walk away from it. My body failed me at that sport. I wasn't able to maintain a quality of life to pursue that sport more. You would think cross-country skiing and cycling cross over to each other really well, but it's actually the opposite. They are two separate motions. Cycling is all pushing and cross-country skiing is all about pulling. I have to de-train as we come off peak ski fitness and get into cycling shape. It's wild to see how my body physically changes. My back muscles and my lats and my triceps are so defined for skiing. When I start cycling, my back muscles and my lats disappear, and my shoulders and my chest and my biceps start to grow. It's just constantly adapting." (si.com, 23 May 2021; teamusa.org, 21 May 2021)

ROLE MODEL
She struggled with self-confidence as a child and believes children with an impairment need more role models. "It's the end of the world if you're having a bad hair day or you have a pimple on your face for school picture day, let alone if you have prosthetic legs and hands that are hard to cover up. Then society has put this label on you, even though you don't see yourself as 'disabled'. That's something that's put on you. I don't want the next generation of young girls and kids to grow up not having tha