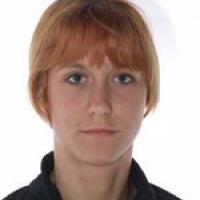 When and where did you begin this sport?
She took up the sport at age 10 in Rome, Italy.
Why this sport?
She was encouraged to get involved in athletics after a gym teacher from school noticed she had potential.
Club / Team
Fiamme Gialle: Rome, ITA
Name of coach
Massimo Di Marcello

In 2014 she had to stop training for a few months due to glandular fever [mononucleosis]. (it.sputniknews.com, 29 Mar 2016)
Sporting philosophy / motto
"I win because I enjoy it and I compete with a smile." (Athlete, 15 Jul 2013)
Awards and honours
She was flag bearer for Italy at the opening ceremony of the 2015 World Championships in Doha, Qatar. (comitatoparalimpico.it, 21 Oct 2015)

In 2014 she received the Woman Sport Award from the Panathlon Roma organisation in Italy. (abilitychannel, 01 Feb 2016)

In 2013 she received the Order of Merit of the Italian Republic. She has also received the Italian Sportrait award in both 2012 and 2013. (Facebook page, 16 Feb 2020)
Ambitions
To win a medal at the 2020 Paralympic Games in Tokyo. (repubblica.it, 16 Jun 2019)
Impairment
She was born with cerebral palsy. (repubblica.it, 16 Jun 2019; thetimes.co.uk, 04 Sep 2016)
Other information
OVERCOMING RIO DISAPPOINTMENT
She found it difficult to overcome the disappointment of missing out on a medal at the 2016 Paralympic Games in Rio de Janeiro. She has since married her husband Domenico, and also finished on the podium at the 2018 European Championships in Berlin, Germany. "I lived through a terrible period, even tinged with a hint of depression, about how it went in Rio. It was my husband who convinced me not to give up, because he knows how important a sports career is for me. I consider Berlin and marrying my husband Domenico as my sporting rebirth." (Athlete, 11 Nov 2019; repubblica.it, 16 Jun 2019)

FROM RUSSIAN FEDERATION TO ITALY
Born in St. Petersburg, Russian Federation, at age two she and her younger sister Olga were adopted by an Italian family. "I feel 100% Italian. From Russia and the orphanage I don't remember anything. My mother says that I used to speak a little bit of Russian but then I stopped speaking it. I don't know, perhaps I wanted to forget it." (it.sputniknews.com, 29 Mar 2016; santaluciasport.it, 29 May 2015)

OTHER ACTIVITIES
She is a Paralympic Sport Ambassador for the Italian Paralympic Committee. "In a historical period like this [speaking in 2021], being an Ambassador is something I am very proud of because it allows me to try to break down barriers, prejudices, stereotypes of every kind of which society is still full." (comitatoparalimpico.it, 26 Jan 2021)