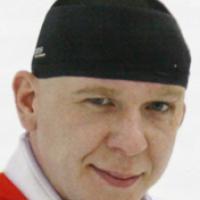 When and where did you begin this sport?
He began playing in 2006.
Why this sport?
He was introduced to Para ice hockey when he and several teammates from the Polish national sitting volleyball team were looking for a more aggressive sport and a new challenge. "In my opinion, there's no better sport than sledge hockey to showcase a person's quality and character. I knew I would adapt quickly and become one of the dominant players. Hockey is something that exposes my character and will to fight."
Club / Team
KS Indra: Poland
Name of coach
Sylwester Flis [national], POL; Tomasz Wozny [national], POL
Preferred position / style / stance / technique
Defence

Nicknames
Ogur (hcstudenka.cz, 2018)
Hobbies
Cycling, watching films, sports. (Athlete, 27 Mar 2019)
Other sports
He has represented Poland in sitting volleyball, and competed at the world championships in 2014 and 2018. He has also won medals in Para athletics [throwing events] at national level in Poland. (paravolley.pl, 08 Jun 2014; sektor3.szczecin.pl, 03 Mar 2012; SportsDeskOnline, 07 Jan 2021)
Ambitions
To compete at the Paralympic Games. (Athlete, 27 Mar 2019)
Impairment
In 1997 he and a friend were electrocuted after they tripped over a high-voltage line which was hanging too close to the ground. He had both legs amputated and had burns covering 90% of his body. On the day of the accident his doctor said he had a 1% chance of survival. A few years later he received compensation from the power company responsible for the line. (przeglad-tygodnik.pl, 03 Sep 2003)
Other information
OTHER ACTIVITIES
He serves as president of KS Indra, a Para sports club based in Kazmierz, Poland. He has also served as player-coach of the club's sitting volleyball team. (Athlete, 27 Mar 2019; kazmierz.pl, 13 Jan 2018; ksindra.pl, 12 Dec 2020)

SANCTION
He was banned for one year between December 2012 and December 2013 after testing positive for cannabis. The drug was found in a urine sample he provided following Poland's bronze medal match with Germany at the 2012 World Championships in Serbia in November that year. At his hearing, he insisted he did not know that cannabis was on the list of banned substances and said he had taken it to ease phantom pain from his impairment and not to enhance his performance. The International Paralympic Committee [IPC] accepted his explanation and instead of imposing the usual two-year ban it was cut to one year. (paralympic.org, 01 Feb 2013)

KILIMANJARO CLIMB
In 2008 he was a part of a charity expedition to climb Mount Kilimanjaro, but he was forced to stop the climb at 5,100m [16,732ft] above sea level because he could not use his wheelchair anymore. (mimowszystko.org, 13 Oct 2008)