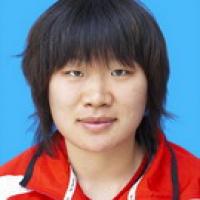 When and where did you begin this sport?
She took up Para athletics in 2005 in Jinan, People's Republic of China.
Why this sport?
She was introduced to the sport by her uncle, who was a physical education teacher.
Club / Team
Shandong Province: China

In 2008 she received a First Class Merit award from the provincial government in Shandong, People's Republic of China. (paper.zbnews.net, 23 Dec 2014)

In 2007 she received the May 4th Youth Medal for Outstanding Contribution by the Communist Youth League of Shandong Province. (paper.zbnews.net, 23 Dec 2014)
Impairment
She was born with an impairment to her arm and was diagnosed with cerebral palsy as a child. (Athlete, 26 Oct 2015; sina.com.cn, 28 Aug 2012)
Other information
OTHER ACTIVITIES
She has worked as secretary of the federation for athletes with an impairment in Zibo, People's Republic of China. (lznews.cn, 16 Apr 2014)