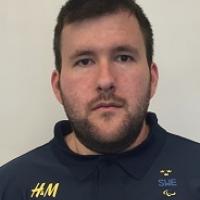 When and where did you begin this sport?
He began playing Para ice hockey at age seven in Malmo, Sweden.
Why this sport?
"I tried table tennis and shooting but when I first played Para ice hockey I knew it was the sport for me."
Club / Team
FIFH Malmo: Sweden
Name of coach
Timo Lahtinen [club, national]; Daniel Tjarnqvist [national], SWE
Training Regime
He has six or seven training sessions per week.
Preferred position / style / stance / technique
Forward

Memorable sporting achievement
Competing at the Paralympic Winter Games in 2006 and 2014. (natverketosterlen.se, 19 Apr 2021)
Most influential person in career
His family. (Athlete, 09 Mar 2014)
Hero / Idol
Swedish ice hockey player Nicklas Lidstrom. (Athlete, 09 Mar 2014)
Sporting philosophy / motto
"Clarify goals for yourself and practise to reach them. Be a good team player. Players that are willing to put time in training will succeed, and most of all it's important to do everything that it takes to become the best." (handikappidrott.se, 2013)
Milestones
At age 14 he was the youngest athlete to compete at the 2006 Paralympic Winter Games in Turin. (ystadsallehanda.se, 21 Feb 2009; SportsDeskOnline, 19 Mar 2006)
Famous relatives
His father Jorgen coached the Sweden national Para ice hockey team at the 2014 Paralympic Winter Games in Sochi. (lokaltidningen.se, 24 Feb 2015; gettyimages.com, 09 Mar 2014)
Ambitions
To compete at the 2022 Paralympic Winter Games in Beijing. (natverketosterlen.se, 19 Apr 2021)
Impairment
He was born with spina bifida, and is paralysed from the waist down. (Facebook page, 27 Aug 2017; Athlete, 09 Mar 2014)
Other information
OCCUPATION
He works part-time as a communications manager at a roofing and sheet metal company in Tomelilla, Sweden. "My free time is spent on training." (natverketosterlen.se, 19 Apr 2021; LinkedIn profile, 01 Feb 2021)