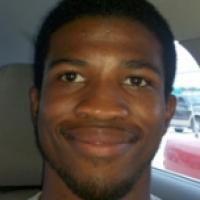 When and where did you begin this sport?
He took up athletics in 2010 at Morehouse College in Atlanta, GA, United States of America.
Why this sport?
Bret Lee, the man who made his prosthesis, encouraged him to take up the sport.

In January 2016 he suffered broken ribs and a heavy concussion when his car was hit by a truck in Florida, United States of America. He was in hospital for two days and was advised to rest for three weeks. (olympics.nbcsports.com, 07 Jan 2016)

He had knee and hamstring injuries in the early part of 2013. (teamusa.org, 12 Jun 2013)
Superstitions / Rituals / Beliefs
At the 2012 Paralympic Games in London, he wore a sock with nine skulls on it to represent his nine siblings. The sock also had a pink stripe at the top in honour of his grandmother's fight with cancer. (teamusa.org, 17 Dec 2012)
Sporting philosophy / motto
"Plans change but as long as you have a purpose in life, everything will be okay." (wsj.com, 12 Jun 2013)
Awards and honours
He was named the Male Athlete of the Month for October 2015 by the United States Olympic Committee [USOC]. (teamusa.org, 03 Nov 2015)

He was part of the US 4x100m relay squad that was named as the 2013 Paralympic Team of the Year by USOC. Other members of the squad that competed at the 2013 World Championships in Lyon, France, were Blake Leeper, Jerome Singleton and Jarryd Wallace. (insidethegames.biz, 24 Oct 2013)
Famous relatives
His sister Cheyenne has competed in athletics [track] for the University of Mississippi in Oxford, MS, United States of America. (interviewmagazine.com, 16 Dec 2015)
Impairment
In 2007 an accident sent him through a plate glass window, which resulted in an arterial bleed that caused his right leg to be permanently damaged. In 2010, after 14 surgical operations, his leg was amputated. "I was 16 years old in the prime of my life. I go through a window one day and from that point on my life is changed forever." (wsj.com, 12 Jun 2013; teamusa.org, 17 Dec 2012)
Other information
COMEBACK FROM RETIREMENT
He briefly retired from the sport after withdrawing from the 2016 Paralympic Games in Rio de Janeiro because he felt his physical condition was not good enough to compete due to a hamstring injury. He made a comeback in 2017. "I had very young children, and I was able to stay home from the time I got hurt and be a full-time dad. That was the best seven or eight months, and that really changed me. I didn't go near a track, I didn't think about the track, after watching the Games I didn't think about track and field at all. I was with my kids every day and that's all I did. And it was amazing. I had some people in the sport call me telling me, 'We need you around Richard', and that was helpful too. My family encouraged me to continue for my goals and my dreams, because that makes me a better person and a happier person. Especially when I saw the results from Rio. I felt kind of disappointed in myself. Even in the condition I was in, I felt I could have won those races after seeing the results. But everybody's smarter in hindsight." (britishathletics.org.uk, 17 Jan 2019; paralympic.org, 08 May 2017)

FAMILY LOSS
He almost missed the 2012 Paralympic Games in London due to a number of tragedies that affected his family. As well as his grandmother battling cancer, his uncle Gary was fatally stabbed the day before he was due to leave for the event. His family persuaded him to compete at the Games. On his return he visited his grandmother, who passed away the next day. (teamusa.org, 17 Dec 2012)