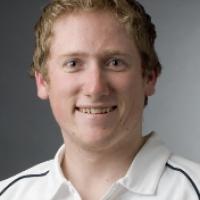 He received a Medal of the Order of Australia [OAM] in 2004. (itsanhonour.cov.au, 18 Dec 2009)
Impairment
He was born with spina bifida. (athletics.com.au, 19 Aug 2011)
Other information
AUSSIE RULES UMPIRE
He was the first wheelchair goal umpire to officiate in the Australian Rules football league in Geelong, VIC, Australia. (paralympic.org.au, 18 Dec 2012)