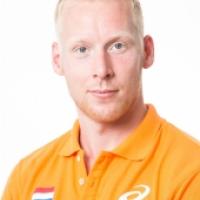 When and where did you begin this sport?
He took up athletics in 2003. He competed at his first Dutch national championships in 2005.
Why this sport?
He was invited to attend a training camp by coach Frank Dik.

He competed at the 2012 Paralympic Games in London despite sustaining a dislocated shoulder two weeks before the competition. He later had surgery on the same shoulder. (telegraaf.nl, 11 Nov 2019; nrc.nl, 16 Sep 2016)

He suffered a major injury to his back after competing at the 2008 Paralympic Games in Beijing. (topsportmetzonderhandicap.nl, 18 Mar 2012)
Sporting philosophy / motto
"Winning means more than beating someone else. It's about beating yourself." (ronald-hertog.nl, 2018)
Awards and honours
He was flag bearer for the Netherlands at the opening ceremony of the 2012 Paralympic Games in London. (paralympisch.nl, 16 Aug 2012)
Impairment
He was involved in a car accident in 2003, which resulted in the amputation of his right leg. (ronald-hertog.nl, 02 Aug 2015; topsportmetzonderhandicap.nl, 18 Mar 2012)
Other information
RETIREMENT
He announced his retirement from the sport in September 2020. In February 2021 he took up a role as an orthopaedic technician with De Hoogstraat Orthopedietechniek in Utrecht, Netherlands. "I want to thank everyone who has been involved in my career in one way or another from the bottom of my heart. Especially my parents, brother, girlfriend, coaches, and sponsors. I'll be moving on to the next step in my life, being a prosthesist. I think with all the experience I have, I can improve the lives of many." (LinkedIn profile, 01 Feb 2021; Instagram profile, 21 Sep 2020)

CHANGE OF DISCIPLINES
In 2012 he switched from javelin to long jump because of persistent shoulder problems. He later switched from long jump to sprint events due to consistently breaking his blades during the takeoff for his jump. "My [long jump] competitors were 20 kilos lighter [than me] and that makes a difference. I became afraid of jumping. I worked with a sports psychologist to get rid of that ominous gut feeling associated with hitting the bar and breaking my blade over and over. But apparently I was no longer able to run freely. The step from the javelin to the long jump and to the sprint is a nuanced difference because the basic training was the same. This [situation] has created opportunities for me. The chance to win three medals in three different pillars of athletics." (telegraaf.nl, 11 Nov 2019; nos.nl, 09 Nov 2019; paralympic.org, 06 Aug 2014)

OTHER ACTIVITIES
In 2017 he began serving as an athletes' commission member for the Dutch Olympic Committee*Dutch Sports Federation [NOC*NSF]. (panorama.nl, 12 Jun 2018; nocnsf.nl, 20 Apr 2017)