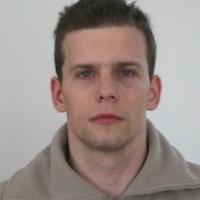 When and where did you begin this sport?
He took up handcycling in 2009 and switched to wheelchair racing in 2013.
Why this sport?
He was an elite gymnast until his accident, and has always had a love and motivation for sport. After he recovered, he began looking for options that suited his impairment.
Club / Team
Brandenburg Prevention and Rehabilitation Sports Club [BPRSV]: Cottbus, GER
Name of coach
Willi Gernemann [national]
Training Regime
He trains five days a week.

Hobbies
Model construction. (bprsv-online.de, 2017)
Awards and honours
In 2015 he was presented with the Order of Merit of Brandenburg in Germany. (cottbus.de, 16 Jun 2015)
Other sports
He represented Germany in gymnastics before his accident. He was part of the national squad that finished 12th in the artistic team event at the 2003 World Championships in Anaheim, CA, United States of America. He also completed the Berlin marathon three times as a handcyclist. (SportsDeskOnline, 29 Sep 2015; sueddeutsche.de, 26 Aug 2014)
Ambitions
To compete at the Paralympic Games. (swp.de, 23 Feb 2017)
Impairment
He has quadriplegia after falling in 2004 during gymnastics training. His neck broke between the fifth and sixth cervical vertebrae. He spent 10 months in hospital following the accident. He is able to use his arms but his range of motion is impaired. (swp.de, 23 Feb 2017, t-online.de, 26 Aug 2014; gymmedia.com, 03 Mar 2014; myhandicap.de, 02 Jul 2008)
Other information
OTHER ACTIVITIES
He worked as a gymnastics commentator for German television during the 2008 Olympic Games in Beijing, the 2012 Games in London and the 2016 Games in Rio de Janeiro. He also served as a co-commentator for German television at the 2018 European Gymnastics Championships in Glasgow, Scotland. (quotenmeter.de, 25 Jul 2018; pressreader.com, 13 Jul 2018)