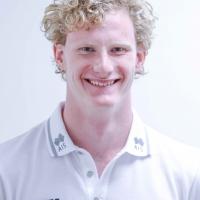 When and where did you begin this sport?
He took up swimming at age seven and began competing in Para swimming in 2009.
Why this sport?
His interest in Para sport was sparked by seeing Australian Para swimmer Peter Leek win gold in the SM8 200m individual medley at the 2008 Paralympic Games in Beijing. "I have always been bad at sports but I always loved swimming. I had to swim with the beginners for a very long time because the cerebral palsy affected my stroke and I got really sad having to swim with the six-year-olds when I was 10. When I saw the Paralympic Games I realised that I could be a great swimmer, just different. I want other kids with disabilities to know they can be great swimmers too."
Club / Team
Yeronga Park: Brisbane, QLD, AUS
Name of coach
Robert van der Zant [club], AUS; Kate Sparkes [club, national]; Brendan Burkett [national], AUS

Nicknames
Magnet ["I earned the nickname when I played water polo because I think on about three or four different occasions I unintentionally stopped a ball from entering the goal with my head."] (smh.com.au, 03 Apr 2014)
Hobbies
Listening to music, playing video games and E-sports, watching films. (swimming.org.au, 14 Apr 2019; Facebook page, 04 Oct 2017)
Memorable sporting achievement
Recording a time of 49 seconds in the 100m freestyle at the Australian national short course championships in 2017. (swimming.org.au, 14 Apr 2019)
Hero / Idol
Australian Para sprinter Geoff Trappett. (swimming.org.au, 28 May 2014)
Sporting philosophy / motto
"Trust the process." (Instagram profile, 22 Nov 2020)
Awards and honours
In 2022 he received the Medal of the Order of Australia [OAM] for service to sport. (Instagram profile, 26 Jan 2022)

In 2017 he was named Paralympic Swimmer of the Year by Swimming Australia at the organisation's annual gala awards night. (swimswam.com, 06 Nov 2017)

He received the 2012 YoungStar Award for Sport from North West News in Queensland, Australia. (couriermail.com.au, 16 Jun 2012)
Other sports
He has competed at the Australian able-bodied national swimming championships and was part of the 4x200m freestyle relay team that won silver at the 2017 edition in Brisbane, QLD. (SportsDeskOnline, 24 Apr 2020)
Ambitions
To compete at the 2024 Paralympic Games in Paris. (Instagram profile, 10 Sep 2021)
Impairment
He has cerebral palsy and chronic lung disease after being born 15 weeks premature. The condition means he has stiffness in his lower limbs and right arm. (paralympic.org.au, 01 Sep 2016; griffith.edu.au, 09 Mar 2016)
Other information
OTHER ACTIVITIES
In February 2022 he became chairman of the advisory board of Choice, Passion, Life [CPL], an organisation that provides support to people with impairments in Australia. In early 2022 he was also named as part of the four-person Para Athlete Leadership Group that will lead the Australian Para swimming team until after the 2024 Paralympic Games in Paris. "The Paralympic programme has come a long way since I first joined the team in 2013, and I have watched myself and others grow in many aspects over this time. One of my primary goals as a leader is to build further upon the performance-driven mentality within the team, creating a more unified team with a greater ability to achieve results both individually and as a team." (LinkedIn profile, 28 Apr 2022; swimswam.com, 21 Feb 2022; melbournesportscentres.com.au, 13 Feb 2020; Twitter profile, 13 Apr 2017)

DOCUMENTARY
In 2020 he appeared in a documentary named 'No Distinguishing Features', which followed six people with impairments. "I hope that when people watch the film, they'll learn that my most significant hardships have not been overcoming my disability, but rather overcoming the limitations, boundaries, and expectations that others place on me because of my disability." (No Distinguishing Features Facebook page, 28 Aug 2020; Instagram profile, 24 Aug 2020)