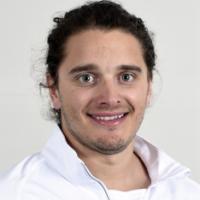 When and where did you begin this sport?
He was a keen skier prior to his accident in 2013. He took up Para skiing four months after the accident in Thredbo, NSW, Australia, and began to ski more regularly when his parents bought a ski lodge in the Perisher Valley, NSW, Australia, in 2014. "I needed something to take my mind off my accident and I needed to set a goal in my life to help me move on and accept what had happened. I decided early on that I was going to ski again. I saw videos of sit-skiers on YouTube when I was in hospital and I said to my parents, 'I'm going to do that. I'm going to go to the Paralympics.'"
Why this sport?
"I tell everyone I meet, if you get the chance to jump in a sit-ski, definitely give it a go. I wouldn't go back to stand-up skiing now that I've tried it. You are a lot closer to the ground, so you feel the hill more. The adrenaline when you are skiing a downhill run and the emotions when you finish are crazy. I've clocked speeds up to 120 kilometres per hour. And when you're on snow, it doesn't feel like you're disabled."
Name of coach
Kelly Beahan [strength and conditioning], AUS
Training Regime
He trains in Perisher, NSW, Australia.

Hero / Idol
Australian Para athlete Kurt Fearnley. (Athlete, 10 Feb 2018)
Injuries
He suffered a partial dislocation of his left shoulder in 2016. (IPC, 10 Feb 2018)
Sporting philosophy / motto
"Why worry? If you have done the very best you can, worrying won't make it any better." (Athlete, 20 Jun 2016)
Other sports
He has achieved a top 10 ranking in the adaptive division of the International CrossFit Games. (paralympic.org.au, 31 Jan 2017)
Ambitions
To win a gold medal at the 2022 Paralympic Winter Games in Beijing. (paralympic.org.au, 15 Mar 2020)
Impairment
He has paraplegia as the result of a motorcycle accident in 2013 in Wollongong, NSW, Australia. "I was riding with three of my mates in the afternoon. I don't remember everything, but I've been told we were riding around a corner and the bike just slid out. I hit a car, and was airlifted to hospital in Sydney. The night that it happened, the doctors knew straight away that I wasn't going to walk again." (Athlete, 20 Jun 2016; shieldandheart.org.au, 20 Nov 2014; YouTube, 02 Jul 2014)
Other information
CLIMB ANY MOUNTAIN
In October 2020 he climbed Australia's Mount Kosciuszko in New South Wales' Snowy Mountains self-powered and with no mechanical assistance. He took seven hours to climb the 16km route. Accompanied by a team of six people he climbed using a combination of his sit-ski, handcycle and sometimes just his arms. "Physically, it was a challenge for me to do something different and see how far I could go. There was a time I was thinking 'have we bit off more than we can chew?' My body was in all sorts of pain but we had come this far, we're not going to give up now. We just pushed through." (abc.net.au, 09 Nov 2020)

UNIVERSITY PROJECT
In 2017 engineering students at the Australian National University [ANU] in Canberra, ACT, Australia, began working on a project to design and manufacture a lower leg protective enclosure for him to use while skiing. The project was undertaken by TechLauncher, an ANU initiative that encourages students to work on real-life projects as part of their course requirements. (cecs.anu.edu.au, 07 Aug 2017)

OTHER STUDIES
He has undertaken an apprenticeship as an electrician in Australia. (Facebook profile, 28 Sep 2017)