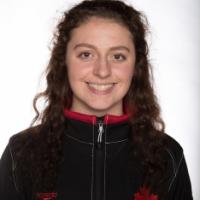 When and where did you begin this sport?
She learnt how to swim in Flin Flon, MB, Canada. She took up Para swimming in 2012 at the Saskatoon Goldfins Swim Club in Saskatchewan.
Why this sport?
She began swimming because there were not a lot of other activities available in the town where she lived. She was introduced to Para swimming by the Saskatoon Goldfins Swim Club coach Steven Hutchings. "I didn't know Para swimming even existed. I just kept training with everybody. I was not very good compared to everybody else so I was thinking about looking into another sport to try. But then Steve, who had coached another Para swimmer, talked to me about it and asked if I wanted to compete in it."

Nicknames
Sam (Instagram profile, 05 Mar 2017)
Memorable sporting achievement
Competing at the 2016 Paralympic Games in Rio de Janeiro. (cbc.ca, 12 Sep 2016)
Most influential person in career
Coach Steven Hitchings. (globalnews.ca, 20 Apr 2014)
Superstitions / Rituals / Beliefs
She always steps onto the starting block with her right foot first. (swimming.ca, 06 Jul 2019; cbc.ca, 12 Sep 2016)
Awards and honours
She was named the 2015 Female Athlete of the Year by Sask Sport in Canada. (teamunify.com, 02 Feb 2016)
Ambitions
To compete at the 2020 Paralympic Games in Tokyo. (torontoobserver.ca, 14 Sep 2016)
Impairment
She had an operation to remove her tailbone when she was a child. "I was born with a tumour. When they removed it during surgery, it affected my legs and the nerves. I have drop feet and can't fully control my feet and the muscles." (swimming.ca, 06 Jul 2019; globalnews.ca, 13 Sep 2016, 20 Apr 2014)
Other information
FROM ENGLAND TO CANADA
She was born in Staffordshire, England, to an English father and a Canadian mother. At age three she moved with her family from England to Flin Flon, MB, Canada. (thestarphoenix.com, 18 Nov 2015)