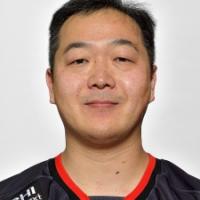 When and where did you begin this sport?
He began playing Para ice hockey in 1997 in Tomakomai, Japan.
Why this sport?
A year before the 1998 Paralympic Winter Games in Nagano, he saw an article about the sport in local newspapers and this sparked his interest.
Club / Team
Hokkaido Bears: Japan
Name of coach
Kenji Nobuta [national], JPN
Preferred position / style / stance / technique
Defence

In 2010 he was given a Special Award by the Tomakomai Amateur Sports Association in Japan. (tomamin.co.jp, 03 Jun 2010)

He was presented with the Hokkaido Prefecture Honorary Prize in 2010, in recognition of winning a silver medal at the 2010 Paralympic Winter Games in Vancouver. (pref.hokkaido.lg.jp, 26 Apr 2010)
Impairment
Both of his legs were amputated below the knee in 1992 after there was an elevator accident where he worked. He was hospitalised for two years. (Athlete, 09 Mar 2018; tomamin.co.jp, 23 Mar 2010; hokkaido-np.co.jp, 07 Mar 2010)