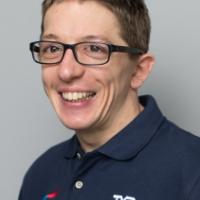 When and where did you begin this sport?
He began Para swimming at age 10 at the Loanhead Dolphins club in Scotland.
Why this sport?
"When you're at school, you see guys doing different sports, you see gymnasts doing somersaults, backflips, my brothers playing rugby through their teenage years, and I'm getting told things like, 'You can't do this'. So me finding a love of swimming, I can just be like, 'I'm good at it. And I can show it'. And that's where my character comes out."
Club / Team
University of Edinburgh: Scotland
Name of coach
Mathew Trodden [club]; Rob Aubry [national], GBR

Hobbies
Cycling, football, supporting Scottish football club Hibernian. (Scottish Swimming YouTube channel, 15 May 2020)
Most influential person in career
His family and friends. (swimming.org, 01 Jan 2015)
Hero / Idol
British Para swimmer Jim Anderson. (backarisingstar.com, 21 Nov 2012)
Superstitions / Rituals / Beliefs
He competes wearing a lucky pair of boxer shorts under his swim shorts. "I had them on when I hit my first international qualification time, and I don't know what it is, but I've had it in my head that they'll always be there when I go to competitions and I've always just done it. We raced in Belfast [Northern Ireland] at the Dave McCullough Meet and I had my lucky boxers on, and there was a boy in the lane next to me who tapped me on the shoulder and said, 'You forgot to take your boxers off'. I said, 'What are you talking about?' And it completely put him off his race because he was too worried about my boxers." (Scottish Swimming YouTube channel, 15 May 2020)
Sporting philosophy / motto
"Teamwork makes the dream work." (scottishswimming.com, 29 Aug 2021)
Awards and honours
He was named the Senior Sports Personality of the Year at the 2016 Midlothian Sports Awards in Lasswade, Scotland. (midlothianview.com, 12 Oct 2016)

He was flag bearer for Great Britain at the opening ceremony of the 2016 European Championships in Funchal, Portugal. (paralympic.org, 26 Apr 2016)

In June 2012 he carried the Olympic torch through the town of Ashington, England, ahead of the 2012 Olympic Games in London. (london2012.com, 10 May 2012)
Impairment
He has Crouzon syndrome, a genetic disorder that involves the premature fusion of the skull's seams. (paralympic.org, 24 Apr 2017; sensationalcellar.wordpress.com, 19 Dec 2011; sport.scotsman.com, 29 Nov 2006)
Other information
OTHER ACTIVITIES
He has served as an ambassador for the UK Sports Association for People with Learning Disability. (dailyrecord.co.uk, 19 Jun 2015)