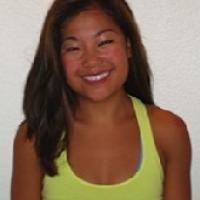 When and where did you begin this sport?
She began the sport at age 14 in Orlando, FL, United States of America.
Why this sport?
She took up running after being introduced to the Challenged Athletes Foundation [CAF] and prosthetist Stan Patterson. "Nothing compares to the exhilarating feeling of being able to move. It wasn't about being first, it was about seeing what was possible."
Name of coach
Tonie Campbell, USA
Training Regime
She trains for five hours a day at the Elite Athlete Training Center in Chula Vista, CA, United States of America.

Memorable sporting achievement
Competing at the 2016 Paralympic Games in Rio de Janeiro. (SportsDeskOnline, 31 Mar 2021; people.com, 24 Feb 2021)
Most influential person in career
US Para triathlete Sarah Reinertsen. (teamusa.org, 19 Sep 2016)
Injuries
In 2011 she suffered from shin splints. (espn.go.com, 06 Dec 2011)
Sporting philosophy / motto
"I find such healing power in running. It changed me from the inside out. It reminds me that there are no limits to what I can achieve or do." (people.com, 12 Sep 2016)
Awards and honours
In 2019 she was inducted into the San Diego Sports Association Hall of Fame in California, United States of America, having previously been named San Diego Sports Association Hall of Fame 2017 Challenged Athlete of the Year. (sandiegosportsassociation.com, 18 Jan 2019)

She was named Challenged Athlete of the Year at the 2011 Endurance Live Awards in San Diego, CA, United States of America. (sportchalet.com, 18 Jul 2013)
Other sports
She has competed in Para triathlon at international level. (teamusa.org, 19 Sep 2016; a.alumni.ucla.edu, 22 May 2014)
Ambitions
To win a gold medal at the 2020 Paralympic Games in Tokyo. (sandiegosportsassociation.com, 18 Jan 2019)
Impairment
As a young child in the People's Republic of China she sustained injuries in a fire that led to the amputation of her right leg above the knee. (Facebook page, 26 Apr 2017; scoutbassett.com, 06 Jun 2016; npcjawatimur.blogspot.com, 07 Jan 2014)
Other information
EARLY STRUGGLES
After the fire that led to her impairment, she lived in an orphanage in Nanjing, People's Republic of China at age one-and-a-half to seven and believes her experiences there and after she was adopted by a family from Michigan, United States of America have inspired her athletics career. "I have no memory of going outside at the orphanage. I didn't have a prosthetic. They made one for me using nuts and bolts and a belt, things you would find in your garage. The foot was a piece of plastic taped on with masking tape. I had no formal education and I couldn't tell you one positive or happy image that I have from there. It was an incredibly traumatic, horrifying experience. I then arrived in America at the age of seven not speaking a word of English in a town of predominantly Caucasian people, so I always struggled to feel like I belonged and I was trying to navigate a world not made for people like me with disabilities, but I wouldn't change anything that happened. I count all the hardships and struggles as a blessing because I know I would not be where I am with my drive and ambition without that early need to keep going and survive. If I look at what I've overcome, I know there is nothing I can't conquer." (popsugar.co.uk, 24 Feb 2021; sports.yahoo.com, 08 Apr 2020; a.alumni.ucla.edu, 22 May 2014)

ROLE MODEL
She has worked with the ESPN Body Issue magazine to change perceptions of women with impairments. "So many women struggle with acceptance of their bodies. I wanted to shift the narrative about women with disabilities. In the world of disability, we often see male characters portrayed as heroes. They're celebrated as bionic and cool. This was just such a great opportunity to show how even though you are a woman with a disability, it isn't a weakness. I'm not body perfect. I have scars and burns, but can be powerful and strong and just as beautiful.” (sports.yahoo.com, 08 Apr 2020)

OTHER ACTIVITIES
She has served as a spokesperson for the Challenged Athletes Foundation [CAF] in the United States of America. "I really struggled in sports when I was younger. I was the kid that didn't get to play in the games. My involvement with CAF changed me from the inside out. I no longer felt marginalised. I didn't feel like the ugly duckling. I love meeting kids at the [CAF] clinics. I see so much of myself in them. I know what it's like to grow up as an amputee, and I want to show them that there is nothing they can't achieve or do in their life." (Facebook page, 26 Apr 2017; mighty1090.com, 10 Mar 2016; a.alumni.ucla.edu, 22 May 2014)

FOCUS ON SPORT
She worked in marketing for a medical device company in San Diego, CA, United States of America, but left that job in 2015 to focus on training for the 2016 Paralympic Games in Rio de Janeiro. "I was living out of my car for a year. When you take huge risks and leaps in your life and you're willing to step out of your box and be uncomfortable, you will be eligible to reap huge rewards. I'm so humbled everything worked out." (people.com, 12 Sep 2016)