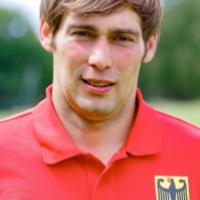 When and where did you begin this sport?
He took up athletics around 2005 at the TV Wattenscheid 01 club in Bochum, Germany.
Why this sport?
After recovering from his car accident, he was encouraged to reconnect with sport by his mother.
Club / Team
BSG Bad Oeynhausen: Germany
Name of coach
Alexander Holstein [national, club], GER

In 2017 he was presented the Goldener Apfel [Golden Apple] by the Wirtschaftsclub [Business club] in Bad Oeynhausen, Germany. (westfalen-blatt.de, 29 Nov 2017)

In 2016 he received the Silbernes Lorbeerblatt [Silver Laurel Leaf] in Berlin, Germany, for his achievements at the 2016 Paralympic Games in Rio de Janeiro. (nw.de, 03 Nov 2016)

He was named Athlete of the Year on four occasions between 2005 and 2010 in Bochum, Germany. (Athlete, 10 Feb 2011)
Other sports
He is a former amateur football player for VFL Neustadt in Germany. In 2012 he coached the women's football team SC Enger. (Facebook profile, 14 May 2017; dietzsebastian.de, 18 Jan 2013; reviersport.de, 16 Nov 2010; Athlete, 22 Aug 2021)
Ambitions
To compete at the 2020 Paralympic Games in Tokyo. (dietzsebastian.de, 23 Nov 2018)
Impairment
He has incomplete quadriplegia as the result of a car accident in 2004, in which a family friend died. He was told that he would never walk again by doctors, but proved them wrong through his rehabilitation programme. (deutsche-paralympische-mannschaft.de, 2015; reviersport.de, 16 Nov 2010)
Other information
OTHER ACTIVITIES
In November 2018 he began serving as coordinator of sports development and rehabilitation for athletes with an impairment at the Sports Association of North Rhine-Westphalia [BRSNW] in Germany. He has also served as a board member at the BSG Bad Oeynhausen club in Germany. (brsnw.de, 16 Jul 2020; westfalen-blatt.de, 24 Apr 2019)

BREAK AND RETURN
In 2007 he took a break from athletics because he felt that there was a lack of team spirit in the disciplines he was competing in. He was also disappointed by his performance at the 2006 World Championships in Assen, Netherlands, and that he had lost his place on the German team. He devoted his time away from athletics to football, and began training youth players in the German C and D divisions. He returned to athletics in 2009 to compete at the German national championships. (dietzsebastian.de, 18 Jan 2013; reviersport.de, 16 Nov 2010)

GOLD MEDAL PROPOSAL
He proposed to his partner Sophie at the 2016 Paralympic Games in Rio de Janeiro, shortly after winning gold in the F36 shot put. (spiegel.de, 17 Sep 2016)