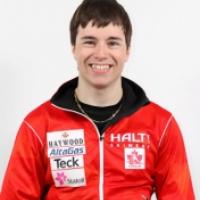 When and where did you begin this sport?
He did not participate in sport before his 2003 accident, and began to take an interest during his rehabilitation. He was introduced to Para Nordic skiing in 2006 and took up the sport seriously in December 2008.
Why this sport?
He initially took up Para Nordic skiing as an occasional activity in order to get back in touch with nature.
Name of coach
Godefroy Bilodeau [personal]

He was suffering from injuries in both shoulders and his back during the 2014 Paralympic Winter Games in Sochi. (ici.radio-canada.ca, 06 Mar 2018)

During the 2012/13 season, he had two rotator cuff injuries, as well as bladder and blood problems which hampered his training. He returned to competition in December 2013. (rmoutlook.com, 12 Dec 2013)

In May 2005 he underwent surgery to remove a small part of his spine. The operation was unsuccessful, which resulted in recurring lower back pain. In 2011 the pain hindered his performances. "I was bothered by back pain, it changed my position on the sled and that is why my results suffered." (hebdosregionaux.ca, 19 May 2012; sebastienfortier.com, 01 Jan 2008)
Other sports
He has competed in handcycling at national level. (canadiancyclist.com, 01 May 2016)
Impairment
In September 2003 he was involved in an accident at work. A bundle of 19 roof frames fell on him, severely injuring his spinal cord and resulting in partial paraplegia. He had not been an athlete before his accident, but during his rehabilitation he began to practise sports to improve his physical condition. (cccski.com, 27 Feb 2011; paralympic.ca, 01 Mar 2010)
Other information
TWO-YEAR BREAK
He took a two-year break from competitive skiing after the 2014 Paralympic Winter Games in Sochi. He returned to the sport in late 2016. "I really took my time to recover from my injuries, without pressure to perform. I started training five or six days a week two years later, in 2016. Coming back slowly, it was the best decision of my career." (lepeuplelotbiniere.ca, 21 Mar 2017; ici.radio-canada.ca, 06 Mar 2018)