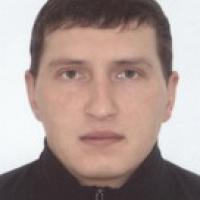 When and where did you begin this sport?
He took up the sport in 2002.
Why this sport?
His teacher for physical training suggested he should train with her husband Mykola Vorchak. He agreed because he did not want to sit at home.
Name of coach
Dmytro Artomin [national]
Coach from which country?
Ukraine

He holds the title of Master of Sport of International class in Ukraine. (ugrasport.ru, 01 Apr 2011)
Other sports
In 2013 he took up shooting in the hope of becoming a member of the national team. (invasport.org.ua, 22 Oct 2013)
Famous relatives
His wife Olena Iurkovska is a five-time Paralympic champion in para-nordic skiing. She competed at the 2002, 2006 and 2010 Paralympic Winter Games, and also at the 2004 Paralympic Games in Athens in sitting volleyball. (goroduman.com, 23 Mar 2010)
Impairment
A train accident at age 17 resulted in the loss of both legs. (skisport.ru, 15 Jul 2007)
Other information
SILVER LINING
Although he did not win a medal the 2006 or 2010 Paralympic Winter Games, he was content with his experience. "Unfortunately I could not win even one medal, given that the level of competition was so high. But I was happy both times that my teammates stood on the [medal] podium." (gorod.cn.ua, 20 Apr 2010)