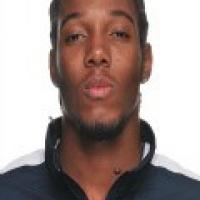 When and where did you begin this sport?
He took up Para athletics after recovering from the amputation of his leg in 2009.
Why this sport?
He was involved in sports before his accident and wanted to continue living an active lifestyle after his leg was amputated.
Name of coach
Joaquim Cruz [personal], BRA

Nicknames
Shaq (teamusa.org, 29 Jun 2012)
Most influential person in career
His family. (hsalabama.scout.com, 18 Sep 2009)
Hero / Idol
US basketball player Michael Jordan, American football player Reggie Bush. (Facebook profile, 22 Oct 2011)
Injuries
A minor injury affected his performance at the 2013 Endeavor Games in Oklahoma City, OK, United States of America. (mcherald.com, 15 Jul 2013)
Sporting philosophy / motto
"Maintain a positive attitude, a clear mind, and never give up. Hard work, dedication, persistence, confidence, desire and teamwork is a formula that works for me." (scout.com, 18 Sep 2009)
Awards and honours
He was named the 2010 Boys Field Athlete of the Year by the US Paralympic Committee. (usparalympics.org, 15 Oct 2010)
Impairment
In 2009, while playing a game of American football with friends, he was tackled in a way that caused his body to turn and his leg to stand still. He was rushed to hospital where he learned that his ligaments had been severely damaged. He had surgery two weeks later, but doctors discovered that no blood was circulating to his foot and his leg was amputated six inches below the knee. (scout.com, 18 Sept 2009)