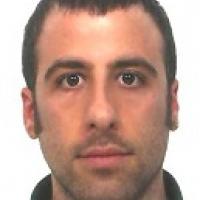 When and where did you begin this sport?
He took up Para athletics in February 2016.
Why this sport?
He was inspired to take up the sport after watching South African Para sprinter Oscar Pistorius. "I happened to find Oscar Pistorius's videos. He was the one who inspired me. I was watching videos of this man who ran with two prosthetic legs and it was awesome. I was like, 'I want to do that too'. When I got my first prosthetic leg, it was like when I got my first PlayStation. Or when you do your driving test and the examiner gives you your licence. Incredible. It was the best gift ever in that moment."
Club / Team
GS Fiamme Gialle: Italy

He was presented with an award by the municipality of Lissone, Italy, in recognition of his silver medal in the T44 400m at the 2017 World Championships in London, England. (ilcittadinomb.it, 17 Sep 2017)
Ambitions
To compete at the 2020 Paralympic Games in Tokyo. (ilgiorno.it, 17 Sep 2017)
Impairment
His left leg was amputated below the knee in 2013 after he was involved in a motorcycle accident. "My foot got stuck between the car and my bike. I could see I no longer had my left shoe on but I still had the sock on. I tried to stand and saw that when I raised my leg my foot fell to the side. So I knew it was still attached, I don't know how. I didn't see the foot clearly but I saw the sock full of blood and the foot just hanging." (gazzetta.it, 24 May 2016; Triple YouTube channel, 19 Feb 2020)
Other information
DEALING WITH IMPAIRMENT
He says he struggled to deal with his impairment and new lifestyle following his accident in 2013. "At the hospital everyone treated me well because I was the one with the worst injury. I felt valued and cared for, so I was feeling good. When I got out the hospital the first thing I noticed is that everyone was looking at me. People watch you, that's it. Like they don't care. In that moment I felt all eyes on me and I started having some issues. I didn't want to be seen. For the first year-and-a-half I always stayed home. I went out if my friends dragged me but I always wore long trousers and was never out for more than a couple of hours. I was wasting my life. I was seeing life move on. My mother went back to work, my brother had his own things to do. My friends came round but it's not like I could force them to stay with me. I didn't know what to do anymore. One day I said, 'This is enough'. I gathered some courage and went out. I was running from it, not facing it. I wanted to start living a normal life." (Triple YouTube channel, 19 Feb 2020)