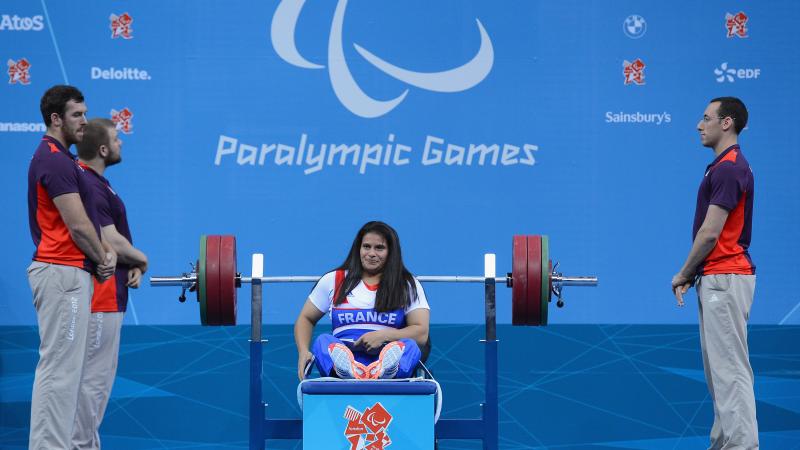 Souhad Ghazouani has been a dominant force in the powerlifting international scene for over a decade. The French showed it at her home European Open Championships in Berck-sur-Mer, where she topped the podium in the women´s up to 73kg with a 135kg lift.

She missed out on the podium of an international competition for the first time at the 2014 World Championships. She had a hernia which prevented her from competing for several months between 2013 and 2014. As a result, she could not reach her best form ahead of Dubai 2014.

Fully recovered from her injury, Ghazouani had her revenge three years later in Mexico City, where she reclaimed her world title from 2010 with a stunning 145kg lift in the women’s up to 73kg. One year before, she had taken silver at her fifth Paralympic Games in Rio.

Ghazouani, who has also competed in wheelchair racing on a national level and is coached by her husband Mehdi Ourizat, began lifting weights at the early age of six.

"I love the fact that powerlifting is an individual sport and I have to depend on myself to achieve results. It allows me to expend all my energy which helps to calm me, and I also like to be stronger than men."

She burst onto the international scene by sealing bronze at the 2003 World Championships. Ghazouani took one step further at the following edition in 2006, claiming silver.

The French powerlifter has also enjoyed success at Paralympic Games. She won silver in her debut at Athens 2004 and bronze at Beijing 2008 before going on to secure her only Paralympic title so far at London 2012.

Ghazouani also holds the world record of 150kg in the women’s up to 73kg she set at the 2013 European Championships, where she won the first of her three continental titles.

When and where did you begin this sport?
She began lifting weights at age six, and began competing at age 12.
Why this sport?
"I love the fact that it's an individual sport and I have to depend on myself to achieve results. It allows me to expend all my energy which helps to calm me, and I also like to be stronger than the men."
Club / Team
ASPTT Haltero: Lille, FRA
Name of coach
Alexis Querou [national]; Mehdi Ourizat [husband]

She did not take part in the sport for five months between 2013 and 2014 due to a hernia. She returned to competition in April 2014 at the World Championships in Dubai, United Arab Emirates. (handisport.org, 20 Nov 2015; Athlete, 04 Dec 2017)
Sporting philosophy / motto
"I can't see myself not doing weightlifting. It's given me, and continues to give me, more autonomy. It really helps people in wheelchairs to go about their daily lives, lifting things, transferring from the wheelchair and so on. This sport is more than a passion. It's part of me and of my life, so it's difficult to stop." (paralympic.org, 07 Jul 2019)
Awards and honours
In 2013 she was named Knight of the French Legion of Honour. (bleushandisport.com, 2018)

She was named Officer of the French National Order of Merit in 2008. (bleushandisport.com, 2018)

She was named Knight of the French National Order of Merit in 2004. (benchpresschampion.com, 01 Aug 2008)
Other sports
She has competed in wheelchair racing at national level. (lavoixdunord.com, 07 Aug 2010)
Famous relatives
Her husband Mehdi Ourizat has coached the French national Para powerlifting team. (handisport.org, 20 Nov 2015; mon.nordpasdecalais.fr, 01 Dec 2014)
Ambitions
To win gold at the 2020 Paralympic Games in Tokyo. (paralympic.org, 07 Jul 2019)
Impairment
She was born with spina bifida. (Athlete, 04 Dec 2017)
Other information
POLITICS
She was a list candidate in the municipal elections of Lille, France, in 2020. (actu.fr, 13 Feb 2020; vspillebout.fr, 2020)