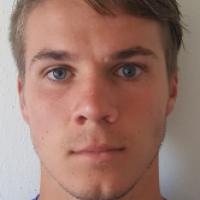 When and where did you begin this sport?
He began the sport in 2012 at high school.
Why this sport?
He originally used the sport as cross-training for American football, which he took up at age five, playing as a linebacker. "My high school trainer had a friend talk to him about Paralympic athletics after watching me play in a high school football game. It wasn't until college that I decided to take it more seriously."
Club / Team
ROI Athlete; Hardin-Simmons University: United States
Training Regime
He trains with the ROI Athlete club in Cedar Park, TX, United States of America and with the Hardin-Simmons University athletics club in Abilene, TX, where he is also a graduate assistant coach. He trains in the gym up to six times a week, and in 2020 he said that lifting weights is his favourite part of training. In the same year, after being asked on Instagram whether he can bench press, he posted a video of himself bench pressing 45 kilograms with one arm, which amounts to two thirds of his bodyweight. Another favourite training activity is kicking American football field goals, which he can score from more than 65 yards.

Hobbies
Music, playing the drums, hunting, shooting, American football, spending time with his pet dogs. (Instagram profile, 12 Mar 2021; Facebook profile, 13 Aug 2020)
Hero / Idol
His brother Tommy Wright. (Athlete, 17 Jul 2017)
Injuries
In 2017 he suffered a hip injury from which he took a year to recover. (baptiststandard.com, 27 Aug 2019)
Awards and honours
In 2017 he was named McMurry University Athletics Department's Outstanding Male Freshman Athlete of the Year. (ktxs.com, 08 Jun 2017)
Other sports
He played American football as a kicker for McMurry University in Abilene, TX, United States of America. (ktxs.com, 31 Mar 2020; ncaa.org, 25 May 2018; ktxs.com, 04 Oct 2016)
Famous relatives
His older brother Tommy Wright played American football at Maryville College in Tennessee, United States of America. (azcentral.com, 11 Jan 2017)
Ambitions
To compete at the 2020 Paralympic Games in Tokyo. (Instagram profile, 14 Feb 2021; ktxs.com, 31 Mar 2020; baptiststandard.com, 27 Aug 2019)
Impairment
He has arthrogryposis in his left arm. The condition shrank his joints when he was still in the womb and as a result the muscles in his left arm, including both biceps and triceps, never fully developed. "It is basically a shrinkage of the joint. It caused atrophy of the muscles and it's not just the arm but it also affects a little bit of my pectoral muscle, a little bit of my back and especially the shoulder." (Facebook profile, 13 Aug 2020; ktxs.com, 27 Jul 2019; ncaa.org, 25 May 2018; ktxs.com, 04 Oct 2016)
Other information
FUTURE CAREER
After finishing his postgraduate studies and retiring from athletics, he plans to work in biomedical sciences at the Scottish Rite Hospital for Children in Dallas, TX, United States of America. He underwent three operations there as a child, and become a volunteer counsellor at the hospital for children with impairments. "I want to be in the prosthetic and orthotics field, but whatever they give me I'd love to work there [Scottish Rite]. I tend to forget I even have an impairment. I do life the only way I know how: I just do it. I've never had to live life any differently. The whole reason I really like to play sports now is to be an example to other kids, to say it's possible to excel in sports. It turned from a selfish thing that I really liked to do into something that's bigger than me." (ktxs.com, 31 Mar 2020; ncaa.org, 25 May 2018; baptiststandard.com, 27 Aug 2019; ktxs.com, 04 Oct 2016)

DUAL-SPORT ATHLETE
He transferred to Hardin-Simmons University in Abilene, TX, United States of America from McMurry University, also in Abilene, in 2019. He had represented McMurry in American football as a kicker, as well as in athletics. "I actually wanted to go to college playing kicker rather than track. Track was just kind of my backup sport. But I never thought I would be a dual-sport athlete." (ktxs.com, 04 Oct 2016; Twitter profile, 08 Jun 2016)

FURTHER STUDIES
In 2021 he graduated from Hardin-Simmons University, and was then accepted into a graduate school programme at the university. He also took a job as a graduate assistant coach for the university athletics team. "It's crazy to see how much has happened in just three months, but new beginnings are coming in strong." (Instagram profile, 14 Feb 2021)