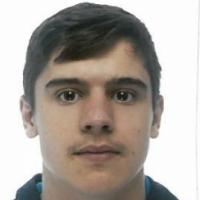 When and where did you begin this sport?
He took up the sport in Swindon, England.
Why this sport?
"I started going to local access days arranged by Swindon Community Health and Wellbeing Team. On one of these days it was at the Swindon County Ground athletics track. There, I was able to access and have a go at various bikes and sports that at school and home I wouldn't have had access to. Whilst I was having a go at boxing, a disability sports officer Job King gave my family a card and thought I had potential. My mum spoke to Job, and was able to get me into a local disability sports club and the local athletics team."
Club / Team
South Gloucestershire Athletics Club: England
Name of coach
Mark Lodge [club]

Injuries
He suffered injuries after being attacked in a park in May 2018. Although he was still recovering, he competed and won two silver medals at the 2018 Cerebral Palsy International Sports and Recreation Association [CPISRA] World Games in Sant Cugat del Valles, Spain, in August that year. (swindonadvertiser.co.uk, 22 Mar 2019; cpsport.org, 01 Nov 2019)
Sporting philosophy / motto
"Taking part in sport is something that I really enjoy, I like getting to meet lots of new people, it makes me feel really positive and like I can achieve whatever I set my mind to." (swindonadvertiser.co.uk, 18 Oct 2019)
Awards and honours
He received the Colin Rains Trophy for Endeavour at the 2019 Cerebral Palsy Sport Awards in Nottingham, England. (cpsport.org, 01 Nov 2019)

In 2019 he was presented with a Pride of Swindon Award in England. He received the award after he was the victim of an attack in May 2018. (swindonadvertiser.co.uk, 22 Mar 2019)
Ambitions
To compete at the Paralympic Games. (cpsport.org, 01 Nov 2019)
Impairment
He has cerebral palsy, autism and attention deficit hyperactivity disorder [ADHD]. (swindonadvertiser.co.uk, 23 Jan 2020)
Other information
CHARITY WORK
In January 2020 he was named as an ambassador for the British charity Cerebral Palsy Sport. In 2019 he took part in the BBC Children In Need Rickshaw Challenge, in which he travelled 400 miles from Holyhead, Wales, to Elstree, England, on a rickshaw in eight days. "I hope that I can inspire other young people who have been through a similar experience to me and show them that you can achieve whatever you set your mind to." (swindonadvertiser.co.uk, 23 Jan 2020, 18 Oct 2019)