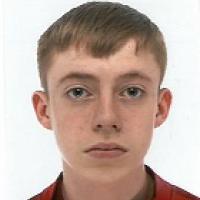 When and where did you begin this sport?
He became interested in Para athletics after attending a RaceRunning taster sessions in late 2013. He joined the Lincoln Wellington Athletics Club in November 2014, where he started regular training.
Why this sport?
He first saw RaceRunning in August 2013 when his mother took him to watch an athletics event for people with cerebral palsy. "I was captivated and badgered my parents to let me try it. I did find it hard making friends to start with when I went to school as I was so different from everyone else. But when I started competing in RaceRunning, everyone was like me. It didn't matter if we wobbled a bit and couldn't talk easily, we all really got on from day one and they are truly my best friends now."
Club / Team
Lincoln Wellington AC: England
Name of coach
Lee Troop [club]

In November 2018 he was named Disabled Sportsperson of the Year at the Lincolnshire Sports Awards. (sleafordstandard.co.uk, 07 Nov 2018)

In 2015 he won the East Midlands Young Achiever of the Year Award in England. (douglasbaderfoundation.com, 29 May 2018)
Famous relatives
His mother, Ali, is the chief executive of Cerebral Palsy Sport [CP Sport] in Nottingham, England. (runjumpthrow.com, 25 Jul 2019)
Impairment
He was diagnosed with cerebral palsy at age one. The condition affects both legs, his right arm, and has some impact on his vision. (douglasbaderfoundation.com, 10 May 2018)
Other information
HIP RECONSTRUCTION
In October 2016 doctors discovered that his hip socket had not formed properly, so in January 2017 he had major hip reconstruction surgery and was warned he may not walk again. He spent seven weeks in a plaster cast followed by rehabilitation, and was able to compete again later that year. The surgery resulted in a reclassification from RR3 to RR2. "I spent my 13th birthday in hospital. Not the best way to become a teenager." (sleafordstandard.co.uk, 07 Nov 2018; douglasbaderfoundation.com, 03 Jul 2018; douglasbaderfoundation.com, 31 Aug 2018)

SPORT FAN
When he was younger he rode horses and used a tricycle to build core strength. He also loves football. "I have always loved sport and I adore football and Manchester United but never thought I would be able to play as I use a [walking/running] frame. I was always the boy that was left on the side lines or put in goal or the last to be picked for a team and would often get upset. Then I got involved in CP Sport and played Frame Football for the first time and I got to play Frame Football at St George's Park and Aston Villa. I can't play now because of my knees, hips and leg issues." (douglasbaderfoundation.com, 03 Jul 2018)