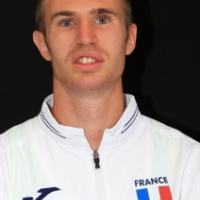 When and where did you begin this sport?
He began training in 2000 in Guyancourt, France.
Why this sport?
After watching the 2000 Paralympic Games in Sydney on television, he was inspired to get involved in sports by an athlete who had a similar impairment to him. "The club of my hometown, Guyancourt, didn't have an impaired sport section, but they decided to help me." He later relocated to Angers, France, to pursue his studies, but didn't have the chance to continue with the sport. In the meantime he took up torball in 2005 and made the national team before switching once again to Para athletics in 2011, after being advised by a friend to go to Charlety, France, where he met coach Arthemon Hatungimana. "It was my personal revenge against my fate."
Club / Team
Paris Universite Club: France
Name of coach
Arthemon Hatungimana [club], from 2011
Training Regime
He trains for more than 20 hours a week at the National Institute of Sport, Expertise and Performance [INSEP] in Paris, France.

In 2017 he sustained peritendinitis in his Achilles tendon. (enroutepourrio.eu, 02 Mar 2017)

He suffered a shoulder injury during the semifinal of the 100m at the 2016 Paralympic Games in Rio de Janeiro. The injury later required surgery. (stadion-actu.fr, 26 Feb 2017)

He competed at the 2013 World Championships in Lyon, France, after having sustained a torn calf muscle before the selection process. (sans-filtre.fr, 14 Aug 2018)

He has suffered a torn hamstring and a double inguinal hernia during his career. (Athlete, 23 Oct 2015)
Sporting philosophy / motto
"Persistence and determination." (sans-filtre.fr, 14 Aug 2018)
Other sports
He has represented France in torball, an indoor ball game for people with visual impairments. (Facebook page, 09 Jul 2018)
Ambitions
To win a medal at the 2020 Paralympic Games in Tokyo. (enroutepourrio.eu, 16 Jan 2018)
Impairment
He was born with congenital glaucoma. At age three he lost the vision in his right eye following a collision with a window. At age 17 he still had 20% vision in his left eye, but he then lost his sight completely after sustaining a blow to the face in a fall. (leparisien.fr, 13 Jun 2018; mouv.fr, 07 Nov 2019)
Other information
THE WHITE CHEETAH
His nickame in French is 'Le Guepard Blanc' [the White Cheetah]. "This nickname started in 2013, the night before my first final at the world championships, which I qualified for to the surprise of most people. And my coach, Arthemon Hatungimana, who is from Burundi, said 'Tomorrow you won't be a lion, because you're not as beefy as a lion, but you will be a cheetah, a white cheetah'. And it's a nickname that has stuck ever since. I like it, it is satisfying to hear." (Europe1 Podcast, 01 Nov 2020)

DISQUALIFICATIONS
Throughout his career he has experienced several disqualifications at major events. At the 2014 European Championships in Swansea, Wales, he was disqualified for a false start from his guide during the 100m final. At the 2016 Paralympic Games in Rio de Janeiro, he was disqualified from the 400m semifinal after having stepped out of his lane line. At the 2017 World Championships in London, England, he was disqualified in the 200m final after he pushed his guide, causing him to lose balance and to cross the finish line first. Also at the 2018 European Championships in Berlin, Germany, he was once again disqualified from the 200m event because he was not wearing his race number. "I am a determined person, so I will continue on as long as I get the reward that I deserve due to all the work I have done with my guides and my coach. Now they are just details to work on so these sort of situations won't happen again." (stadion-actu.fr, 25 Aug 2018; sans-filtre.fr, 14 Aug 2018)

MUSIC
He is a hip hop music enthusiast and was a member of a band called TMRIT, but had to leave it in order to focus on his training. In 2019 he recorded a song called 'Olympe'. "I began writing at age 13. At the beginning it was more slam texts rather than rap. I then switched naturally to rap because my sister listened to it and my cousin composed. It's true that I quickly liked the protest side of music." During the COVID-19 pandemic he released a single about his impairment entitled 'La Banane', which means having a large smile [similar to a banana]. "It's a universal idea. I'm not sure about the US, but in France, this resonates with people with a disability. There are often people with the idea, 'Oh, poor thing, he can't do this, he can't do that,' so the idea behind 'La Banane' is to say, 'Voila, here is a typical journey for a person with disability. My life is full of projects, and it doesn't stop me from being equal, nor does it dim my smile.'" (Facebook page, 02 Oct 2019; france3-regions.francetvinfo.fr, 23 Aug 2018; sans-filtre.fr, 14 Aug 2018; mouv.fr, 07 Nov 2019; paralympic.org, 08 Sep 2020)

ONE MAN SHOW
In 2020 he produced and performed a one-man show in Rambouillet, France, mixing anecdotes about sport and his impairment with music. "Through rap, I can pass on a lot of things about disability. But there are other things that I can also convey through other vectors like laughter and humour. Again, I wanted to discover this world. For more than an hour, I'm going to bring the three worlds together with humour, while bringing reference to disability, because far too much is not known in society about it. The notion of making people laugh can go through text, mimicry or visual effects." (sport.francetvinfo.fr, 21 Jul 2020)