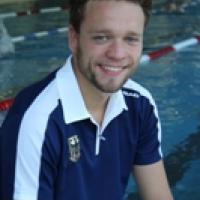 Memorable sporting achievement
Winning a silver medal in the SB6 100m breaststroke at the 2012 Paralympic Games in London. (Facebook page, 17 Jul 2017)
Injuries
In April 2016 an illness prevented him from competing at the Swim Cup in Eindhoven, Netherlands. (Facebook page, 04 Apr 2016)
Sporting philosophy / motto
"Sports should be fun. Results will only come with fun. Don't be discouraged when you fail but look forward and believe in yourself." (schwimmteam-potsdam.de, Mar 2012)
Awards and honours
In 2012 and 2016 he received the Silbernes Lorbeerblatt [Silver Laurel Leaf] in recognition of his performances at the Paralympic Games. (Facebook page, 02 Nov 2016; bundespraesident.de, 07 Nov 2012)
Ambitions
To compete at the 2020 Paralympic Games in Tokyo. (Facebook page, 06 Apr 2017)
Impairment
He was born with dysmelia in his legs, and three fingers on his left hand. (Athlete, 04 Apr 2011)
Other information
BREAK
He took a break from competition after participating at the 2016 Paralympic Games in Rio de Janeiro. He returned to competitive swimming in April 2017 at the Mecklenburg-Vorpommern state championships in Germany. (Facebook page, 06 Apr 2017; lsb-mv.de, 01 Apr 2017)