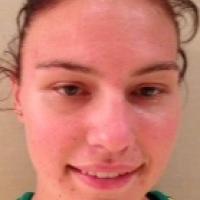 When and where did you begin this sport?
She took up athletics at age 14 at school.
Why this sport?
Her hero was Australian athlete Cathy Freeman and she wanted to follow in her footsteps. "I remember I watched [Australian sprinter] Cathy Freeman as a school assignment in grade four, so that was back in 2004, and I watched her 400m, so I always wanted to run the 400m. And then I started doing athletics but I was like you won't be able to go to the Olympics, without being too negative, it was more a realistic thing. I knew of the Paralympics but I didn't know I would compete in it. In 2010 or 2011 I was like 'that's what I wanted to do'."
Club / Team
Queensland Academy of Sport: Australia
Name of coach
Wayne Leaver [personal], from 2013

She was found to have 11 bone fractures in her legs when she ran the 100m at the 2012 National Championships in Melbourne, VIC, Australia. (paralympic.org.au, 01 Aug 2012)
Sporting philosophy / motto
"Focus on what needs to be done." (Instagram profile, 02 Apr 2020)
Awards and honours
She was the 2019 Arafura Games flag bearer in Darwin, NT, Australia. (arafuragames.nt.gov.au, 26 Apr 2019; arafuragames.nt.gov.au, 23 Apr 2019)
Impairment
She was born with cerebral palsy, is blind in her right eye and has only 10% minimised vision in her left. (tracker.org.au, 28 Aug 2012; paralympic.org.au, 01 Aug 2012)
Other information
ARAFURA HONOUR
She was the 2019 Arafura Games flag bearer in Darwin, NT, Australia. "I had no idea. It just came out of the blue. It's a real privilege, shows support for the Games and it's an honour to be carrying the flag for the Arafura Games. I think I'm the only indigenous Para athletics athlete competing so it's a huge privilege. I also get to wear my spikes which were designed by Aboriginal artist Darren Dunn." (arafuragames.nt.gov.au, 26 Apr 2019; arafuragames.nt.gov.au, 23 Apr 2019)

EMOTIONAL MEDAL
At the 2017 World Championships in London, England, she dedicated the bronze medal she won in the T38 400m to her great-grandfather, who died one month before the event. "I wanted the bronze for my great-grandfather [Charles Preston] who passed away a month ago. He fought in World War Two and was my idol. I used to ring him up every weekend. He was the one who motivated me, so this is dedicated to him." (paralympic.org, 21 Jul 2017)

INSPIRATION
She says in the beginning she wanted to compete in the 400m individual like her idol Australian sprinter Cathy Freeman and went on competing in the 100m, 200m, and 4x100m relay at the 2012 Paralympic Games in London. She could only began training for the 400m in 2014 when the International Paralympic Committee [IPC] included the event for the 2016 Paralympic Games in Rio de Janeiro. "In the middle of 2014 we decided to start training for the 400m as the IPC decided to bring the event back into the Paralympic programme for the 2016 Games. Within the first six months I broke the under 20 and the open Australian 400m record. Then just over 12 months later we won our first ever world championships bronze medal." (Instagram profile, 30 Dec 2020; Athletics Australia YouTube channel, 12 Nov 2020)

RETIREMENT THOUGHT
She credits her coach Wayne Leaver for encouraging her to keep on going when she wanted to quit the sport in 2017. "While having a lot of things happening away from the track in 2017 I can remember saying to Wayne multiple times I didn't want to do this anymore but he knew I did and that I was just struggling at the time. So winning the bronze medal [in the 400m] at the 2017 World Championships was his just as much as it was mine. Away from the track we have also achieved so much together. I have not just become a better athlete, I've also became a better person." (Instagram profile, 30 Dec 2020)

OTHER ACTIVITIES
She has served as an ambassador for the Raise the Bar Academy, a joint initiative between Athletics Australia and the University of Melbourne that provides summer camps for indigenous high school students. The programme aims to encourage students to attend post-secondary education and pursue a career in the sports industry. She is also an ambassador for the Deadly Choices indigenous health programme, which encourages indigenous school students to make healthy lifestyle choices. (muac.org.au, 17 Jan 2019; sunshinecoastdaily.com.au, 09 Sep 2016)

CLASSIFICATION
She initially competed in the T13 events [vision impairment] before being reclassified to T38 in 2012 due to her cerebral palsy. (willowbankraceway.com.au, 13 Jul 2012)