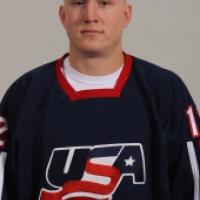 When and where did you begin this sport?
He took up the sport in 2008 in Colorado, United States of America.
Why this sport?
He was introduced to Para ice hockey by his friend Nikko Landeros.
Preferred position / style / stance / technique
Defence

Most influential person in career
His father. (Athlete, 29 Mar 2018)
Hero / Idol
US actor Arnold Schwarzenegger. (Athlete, 29 Mar 2018)
Sporting philosophy / motto
"You've got to look good with what you've got." (Athlete, 06 Mar 2014)
Awards and honours
In 2017 he received a Medal of Courage from the Colorado Chapter of the National Wrestling Hall of Fame in the United States of America. (reporterherald.com, 11 May 2017)
Other sports
He competed in bodybuilding at the 2010 Warrior Classic in United States of America. (5280.com, 10 Aug 2010)
Impairment
In 2007 he was travelling home from a school dance with his friend Nikko Landeros. They stopped at the side of the road to change a tyre when a vehicle struck them, pinning them between two sport utility vehicles. Carron's injuries led to one of his legs being amputated above the knee and the other at the knee [disarticulation]. (oandp.com, 01 Aug 2014; teamusa.org, 04 Dec 2012)
Other information
SANCTION
He was banned for 18 months between March 2018 and September 2019 after testing positive for methadone at the 2018 Paralympic Games in Pyeongchang. He was also stripped of the gold medal the United States of America won at the Games. (IPC, 11 Feb 2019; insidethegames.biz, 11 Feb 2019)

FRIENDSHIP
His friend Nikko Landeros also lost his legs in the accident that led to Carron's impairment. They had been wrestling teammates at high school and both went on to become members of the US national Para ice hockey team that won a gold medal at the 2014 Paralympic Winter Games in Sochi. "It was cool seeing Nikko playing [at the 2010 Paralympic Winter Games in Vancouver]. It looked real fun, so I was glad I was able to do it four years later [in Sochi]. It meant a lot for me that I was able to share that experience with him." (denverpost.com, 23 Mar 2014; teamusa.org, 04 Dec 2012)