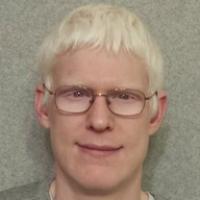 When and where did you begin this sport?
He took up the sport at age eight in Idaho, United States of America.

Nicknames
White Rabbitt (Facebook profile, 24 Apr 2017)
Most influential person in career
Coach Dace Neilsen. (Athlete, 25 Oct 2015)
Sporting philosophy / motto
"When facing your obstacles and adversity, just go for it, and if you fail, look at it as a way to learn rather than being scared to fail." (idahostatejournal.com, 30 Jan 2018)
Other sports
He played American football at high school. (iheart.com, 21 Feb 2019)
Ambitions
To compete at the 2020 Paralympic Games in Tokyo. (idahostatejournal.com, 30 Jan 2018)
Impairment
He was born with albinism, which led to a vision impairment. "It's kind of like watching TV all the time. It's flat. I don't have depth perception. It's like looking through binoculars backward in a way. It's small, but I can see everything you can see. It's just small and flat." (Athlete, 25 Oct 2015; mormonolympians.org, 04 Jul 2016; idahostatejournal.com, 22 Oct 2016)
Other information
RETIREMENT THOUGHTS
He considered retiring from Para athletics in 2017 after classification changes were announced for the high jump at the 2020 Paralympic Games in Tokyo. He decided to switch to the long jump and continue competing in the sport. "In 2017, after Rio, they dropped the high jump. I was going to retire after 2017 and then they announced for Tokyo, they are going to have the long jump. I like long jumping, but not as good as high jump, but if I put in the work, we can go for a medal." (iheart.com, 21 Feb 2019)

OCCUPATION
He works as a marketing director at Woodies Racing, a professional snocross team based in Princeton, MN, United States of America. (LinkedIn profile, 2020; Facebook profile, 01 May 2020)

OTHER STUDIES
In 2012 he graduated with a degree in marketing from Idaho State University in Pocatello, ID, United States of America. (LinkedIn profile, 2013)