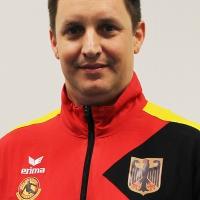 When and where did you begin this sport?
He took up the sport in 1999 at age 26 in Hanover, Germany.
Why this sport?
"Before my accident I played handball at a high level. After the accident I searched for a hard and physical sport."
Club / Team
Ice Lions Langenhagen: Germany
Name of coach
Andreas Pokorny [national], GER
Preferred position / style / stance / technique
Forward

He has suffered four broken ribs during his career, keeping him out of action for around two weeks each time. (Athlete, 20 Feb 2013)

He has broken his fingers several times, keeping him out of action for around three weeks each time. (Athlete, 20 Feb 2013)
Sporting philosophy / motto
"Always give your best, and be a teammate." (Athlete, 20 Feb 2013)
Other sports
He has played wheelchair basketball at club level in Germany. (hannover-united.de, 2016)
Ambitions
To compete at the 2018 Paralympic Winter Games in Pyeongchang. (Facebook profile, 31 Aug 2016)
Impairment
An accident on the underground railway network in Hanover, Germany, resulted in his lower legs being amputated below the knee. (Athlete, 20 Feb 2013; ice-lions-langenhagen.de, 22 Jan 2013)