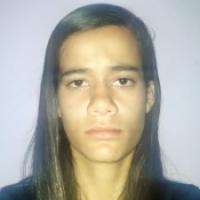 When and where did you begin this sport?
She took up Para athletics in 2012.
Why this sport?
She initially competed in judo but was forced to stop at age 13 after undergoing surgery to remove a brain tumour. Her father later introduced her to athletics.
Training Regime
She trains at the Paralympic Training Centre in Sao Paulo, Brazil.

In 2015 she underwent surgery to remove 90% of her large intestine, and was unable to compete at the 2015 World Championships in Doha, Qatar. (paralympic.org, 02 Feb 2016; tvbrasil.ebc.com.br, 07 Dec 2017; globoesporte.globo.com, 23 Apr 2018)
Sporting philosophy / motto
"An athlete is not made of luck. If we were, we would have won the lottery, not be practising sport. An athlete is made from training." (rio2016.com.br, 2014)
Awards and honours
She was named the 2013 Newcomer of the Year by the Brazilian Paralympic Committee [CPB]. (paralympic.org, 12 Dec 2013)
Other sports
She competed in able-bodied athletics until April 2013, when she discovered she was eligible for Paralympic events. (portalpcdonline.com.br, 25 Oct 2013)
Impairment
She underwent surgery to remove a brain tumour in 2009. She then suffered a stroke in March 2011, which resulted in reduced strength in the right side of her body. Her right leg has 70% reduced strength. (portalpcdonline.com.br, 25 Oct 2013; lancenet.com.br, 26 Jul 2013; boaforma.abril.com.br, 09 Jan 2018)
Other information
HEALTH ISSUES
She was first diagnosed with a brain tumour in November 2009, and underwent surgery to remove it. In 2011 she had a stroke, which resulted in partial paralysis of the right side of her body and also affected her voice. "My neurosurgeon told me that I would not be able to walk, to use my right side or to speak properly anymore." In 2015 she was diagnosed with anemia, which was caused by over 200 tumours on her large intestine that were produced by familial adenomatous polyposis. She underwent surgery to remove 90% of her large intestine. The tumours on her brain have returned three times, but were treated through medication in 2013, and surgery in 2016 and 2018. "I could have stood still after my stroke, could have given up after removing the large intestine with 200 tumours and now after this new surgery [2018], but I'm living. And I want to live. I want to be a giant of the 21st century, I want to be someone that everyone looks at and is inspired by." (boaforma.abril.com.br, 09 Jan 2018; paralympic.org, 27 Apr 2018; tvcbrasil.ebc.com.br, 07 Dec 2017; globoesporte.globo.com, 21 Sep 2018)

STUDIES ON HOLD
She put her university studies on hold so that she could prepare for the 2016 Paralympic Games in Rio de Janeiro. (paralympic.org, 02 Feb 2016)

YOUNGEST
She was the youngest member of the Brazilian squad at the 2013 World Championships in Lyon, France. (lancenet.com.br, 26 Jul 2013)