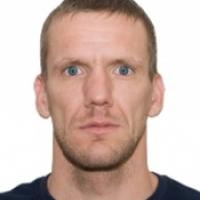 When and where did you begin this sport?
He began playing Para ice hockey in 2011 in Izhevsk, Russian Federation.
Why this sport?
As a child he enjoyed team sports such as volleyball and basketball. After his leg was amputated, he met Nail Ziyatdinov, vice president of the Udmurt Foundation for the Impaired and War Veterans, who encouraged him to try Para ice hockey.
Club / Team
Udmurtia: Izhevsk, RUS
Name of coach
Alexander Chuzhanov [club], RUS; Ruslan Batyrshin [national], RUS
Preferred position / style / stance / technique
Goaltender

He received the Order For Merit to the Fatherland [first grade] in Russian Federation, in recognition of his performance at the 2014 Paralympic Winter Games in Sochi. (kremlin.ru, 17 Mar 2014)

He has received the title of Honoured Master of Sport in Russian Federation. (minsport.gov.ru, 26 Apr 2021)
Ambitions
To win a gold medal at the Paralympic Winter Games. (Athlete, 27 Oct 2020)
Impairment
In 2000 he was serving with the Russian Armed Forces during the Second Chechen War when he was wounded in an ambush. A bullet damaged the sciatic nerve in his leg, affecting the blood circulation. Despite several operations on the injury, his leg had to be amputated. (dislife.ru, 10 Oct 2012)