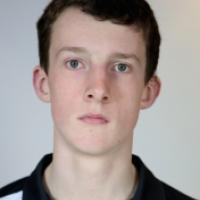 When and where did you begin this sport?
He took up Para athletics in 2014 at age 14.
Why this sport?
"I never thought of athletics before, but when I went to London in 2012 [on holiday], the Paralympics were on. I thought, 'Oh I could actually try doing that', and I got quite inspired by watching them."
Club / Team
Port Hills Athletic Club: Christchurch, NZL
Name of coach
George Edwards [club], from 2014

He was named 2016 Junior Sportsperson of the Year by ParaFed Canterbury in New Zealand. (paralympics.org.nz, 30 Nov 2016)

He was named 2015 Para Athlete of the Year by Sport Canterbury in New Zealand. (stuff.co.nz, 13 Oct 2015)
Ambitions
To win long jump and 400m medals at the 2020 Paralympic Games in Tokyo. (Facebook page, 17 Nov 2019; odt.co.nz, 21 Nov 2019)
Impairment
He was born with cerebral palsy, which predominantly affects the left side of his body, as well as his coordination. "I'm not as strong at my left side, also my coordination is impaired. When I'm sitting down or walking, it's not too bad. When I'm running my left side only does what it wants to do, so my running forms are not that great." (WeAreCanterbury Facebook page, 21 Apr 2020)
Other information
CLASSIFICATION
He was initially classified T38 when he began competing in New Zealand. In 2015 he obtained his international classification and was classified T36 by the International Paralympic Committee [IPC]. "If you're an amputee, it's pretty clear cut, they make sure that you're in the right boundaries, whereas in cerebral palsy things could go a little bit more subjective. The IPC moved me down to T36 which was like a big thing. I was super quick [in the T38 class], and then suddenly like the qualifying time was a lot more achievable [in the T36]. So then I managed to qualify for the world championships and other big events. I've been classified twice in the past two years [speaking in 2020], and it came out the same." (WeAreCanterbury Facebook page, 21 Apr 2020)

POST-RIO EXPERIENCE
He had to catch up his school lessons after leaving for the 2016 Paralympic Games in Rio de Janeiro. "I was away for six weeks. My teachers were giving me works early if I could. My parents had a friend from our church who managed to tutor me. But then it was a case of making sure that I was working hard and finding times to catch up, to make sure that I wouldn't fall behind." (WeAreCanterbury Facebook page, 21 Apr 2020)