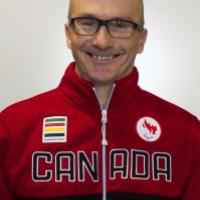 When and where did you begin this sport?
He began skiing in 1986, and took up Para Nordic skiing in 2008.
Why this sport?
"When I was young, the only sport for people in wheelchairs was basketball, but I didn't try. I was more interested in individual sports. Cross-country skiing was always my sport."
Name of coach
Francois Trudeau [personal]

Hero / Idol
Canadian Para Nordic skier Brian McKeever. (paralympic.ca, 11 Feb 2014)
Injuries
He injured his shoulder at the 2013 World Cup event in Canmore, AB, Canada. (cbc.ca, 03 Mar 2014)
Sporting philosophy / motto
"I have dreams like you, handicapped or not. There is no age, no limit. Have dreams and goals." (handicaps.ca, 05 Oct 2011)
Other sports
He has been a member of the Canadian national Para canoe team. (canoekayakbc.ca, 27 Jun 2018)
Ambitions
To compete at the 2022 and 2026 Paralympic Winter Games, and at the 2024 Paralympic Games in Paris in Para canoe. (lenouvelliste.ca, 07 Nov 2021)
Impairment
He was born without both legs. (mauricie.mag2000.ca, 10 Dec 2011)
Other information
CLASSIFICATION SWITCH
In early 2016 his impairment classification was switched from LW12 to LW11. He had previously been competing against skiers that had a greater use of their abdominal muscles than him. "The percentage system that existed before disadvantaged me, since I do not have lower limbs. This is no longer the case now and I moved several positions in the international ranking [after the classification change]." (lenouvelliste.ca, 02 Mar 2017; ici.radio-canada.ca, 17 Feb 2016; cccski.com, 2014, 18 Feb 2016)