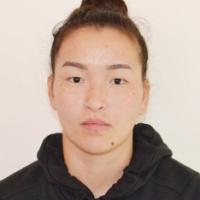 When and where did you begin this sport?
She took up the sport in 2013 in Talgar, Kazakhstan.
Why this sport?
She had always liked skiing.
Club / Team
Almaty Sports Club: Kazakhstan
Name of coach
Vasily Kolomiyets [national], KAZ

Hobbies
Singing, dancing. (Athlete, 19 Dec 2017)
Memorable sporting achievement
Winning bronze in Para canoe in the KL3 200m at the 2016 Asian Championships in Samarkand, Uzbekistan, and finishing sixth in the 5km cross-country race at the 2015 World Cup event in Japan. (Athlete, 19 Dec 2017)
Most influential person in career
Her coaches, and her mother. (Athlete, 14 Mar 2014; Social Mediaportal YouTube channel, 23 Apr 2018)
Hero / Idol
Jamaican sprinter Usain Bolt. (Athlete, 19 Dec 2017)
Sporting philosophy / motto
"If you set a goal, achieve it." (Athlete, 19 Dec 2017)
Awards and honours
She has received the titles of Master of Sport in Para cross-country skiing, and Master of Sport of International Class in Para canoe. (Athlete, 19 Dec 2017)
Other sports
She has participated in Para canoe and won bronze at the 2016 Asian Championships in Samarkand, Uzbekistan. She has also competed in Para swimming and Para athletics at national level in Kazakhstan. (paralympic.kz, 13 Jun 2013; almatysportclub.kz, 15 May 2015; inform.kz, 28 Sep 2016)
Ambitions
To become a Paralympic champion. (Social Mediaportal YouTube channel, 23 Apr 2018)
Impairment
She was born without her left leg and several fingers on her hands. (Athlete, 14 Mar 2014; tengrinews.kz, 26 Feb 2014)
Other information
FURTHER EDUCATION
She graduated in art design from Taraz State Pedagogical Institute in Kazakhstan, and received a master's degree in sports management at the University of British Columbia in Vancouver, BC, Canada. (Athlete, 06 Mar 2018, 19 Dec 2017)

EARLY DAYS
As a child she insisted that she go to an regular school, rejecting the idea of being home schooled or going to a specialised boarding school. During her first years of school she was bullied because of her impairment, but by the fifth year of studying she was confident enough to stand up for herself. "I used to cry, I used to miss school because of it, and my mother would get mad at me. But when I was in the fifth grade, they'd tell me that I'm handicapped, and I'd say 'I'm not, I have the soul of a complete person'." (almatysportclub.kz, 15 May 2015)