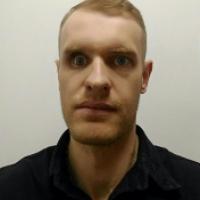 When and where did you begin this sport?
He began swimming in 2016.
Why this sport?
He used to play futsal and football from age six to 17. After sustaining his injury he took up swimming as a form of rehabilitation. "I did hydrotherapy for 10 years, and after that I began swimming as a hobby. After some time I realised that my life as an athlete could continue with swimming, so I entered a club to train. After one month I was surprised, as a I saw that I could do it. I was later invited to join the Para swimming team at the Pontifical Catholic University of Parana state."
Club / Team
Associacao dos Deficientes Fisicos do Parana [ADFP]: Curitiba, BRA

Other sports
He has competed in Para triathlon at national level in Brazil. (tribunapr.com.br, 21 Aug 2017; cbtri.org.br, 2017)
Impairment
At age 19 he sustained a spinal cord injury that prevents him from moving his lower limbs. He also lost the movement in his left arm but regained it after rehabilitation and swimming. (tribunapr.com.br, 21 Aug 2017)
Other information
PARA TRIATHLON
After taking up swimming he was also invited by his coach to try wheelchair racing. "My coach, aware of my determination, wanted to do an experiment and that was how I began training with a racing wheelchair." After this, he was invited to try cycling with a view to taking up Para triathlon. "I was invited by a coach to do triathlon training to see if I could adapt to the discipline. It went very well. With the bicycle I felt a sensation of freedom. Being on the bike was something very addictive to me." In 2017 he competed in the Brazilian national triathlon championships, where he finished in fourth place using a borrowed racing chair. "Even without having the ideal equipment and racing with a wheelchair that was not the right size for me, I almost made it onto the podium." (tribunapr.com.br, 21 Aug 2017; swimex.com.br, 2017)

FURTHER STUDIES
Besides his degree in accounting he has also studied business administration. (folhadecampolargo.com.br, 04 Sep 2018)