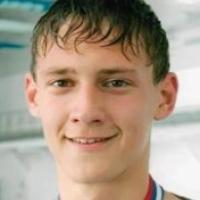 When and where did you begin this sport?
He began training in 2007 in Vyselki, Russian Federation.
Why this sport?
He became interested in the sport when he learned his local sports centre had a swimming pool. He also thought swimming would be good for his health.
Club / Team
Victoria Youth Sports School: Vyselki, RUS
Name of coach
Igor Kushpelev, RUS, from 2005
Training Regime
He trains twice a day.

Nicknames
Sasha (kuban24.tv, 15 Sep 2015)
Hobbies
Car mechanics. (Athlete, 26 Apr 2016)
Memorable sporting achievement
Winning a gold medal at the 2014 European Championships in Eindhoven, Netherlands. (Athlete, 26 Apr 2016)
Most influential person in career
He models himself on coach Igor Kushpelev, who competed at the 1976 Olympic Games in Montreal. "Having learned about his achievements, I too set a goal for myself and began heading toward it." (Athlete, 23 Mar 2015; vlast-sovetov.ru, 04 May 2010)
Awards and honours
He holds the title of Master of Sport of International Class in the Russian Federation. (Athlete, 26 Apr 2016)
Impairment
He was born without a right hand. (ki-gazeta.ru, 12 Mar 2011)
Other information