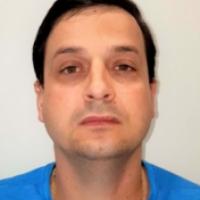 When and where did you begin this sport?
He took up shooting Para sport in 2012.
Why this sport?
"I always liked to shoot and my parents always supported me. My father was in the military and he always encouraged people to shoot, so I went back to the stand to practise. One day, a guy saw me shooting and said: 'Gee, you shoot well. Why don't you start taking part in tests?' I looked at my dad and said, 'Can you help me?'. And then I started."
Name of coach
James Walter Lowry Neto [national]

Memorable sporting achievement
Competing at the 2016 Paralympic Games in Rio de Janeiro. (rededoesporte.gov.br, 28 Aug 2019)
Most influential person in career
His father. (rededoesporte.gov.br, 28 Aug 2019)
Injuries
In January 2017 he broke the femur bone in his right leg after falling from his wheelchair. He returned to training in April 2017. In 2018 he had to undergo surgery to insert screws into the fracture. (cpb.org.br, 01 Dec 2018, 11 Jun 2017; Jornal Acias, 21 Jul 2017)
Sporting philosophy / motto
"What I always say to everyone is to never give up, because everything is possible. Just aim and go for it. There are a lot of people wanting to help. In the end, the fight is worth it." (rededoesporte.gov.br, 28 Aug 2019)
Awards and honours
In 2021 he was named Para Shooter of the Year by the Brazilian Paralympic Committee [CPB]. (liberal.com.br, 19 Feb 2022)
Other sports
Prior to his accident he played basketball at provincial level in Brazil. (rededoesporte.gov.br, 28 Aug 2019)
Ambitions
To win a medal at the 2024 Paralympic Games in Paris. (liberal.com.br, 19 Feb 2022)
Impairment
He sustained spinal injuries after hitting his head on the bottom of a swimming pool at age 18. He underwent three operations. "I have no movement in my hands. I can only move my trigger finger and, even then, very little. Thankfully, the trigger is very light." (rededoesporte.gov.br, 28 Aug 2019; paginapopular.com.br, 24 Dec 2015)
Other information
BRAIN TRAINING
He has used electrodes and neuro-feedback during his training sessions. The electrodes are attached to his frontal lobe to measure his level of concentration, while he also practises regulating his heartbeat through a computer programme and finger electrodes. "This type of control is crucial for athletes in shooting. An accelerated heartbeat results in a greater contraction of the muscles and movement can be disrupted. Too low a beat may make your vision worse." (cpb.org.br, 02 Sep 2017)

RETIREMENT THOUGHTS
In March 2014 his father passed away suddenly after suffering a heart attack. At that point Galgani considered retiring from shooting Para sport, as his father has also been his personal coach. "I thought about giving up the sport. It was too sad. It was my father who trained with me every day and he was my best friend. My family came in, with my friends, and they said that I should not give up. They told me they were going to take turns, so one day my friends would train with me, on the other day my mother would train with me, and then my brother. I ended up not giving up and I managed to overcome." (rededoesporte.gov.br, 28 Aug 2019)