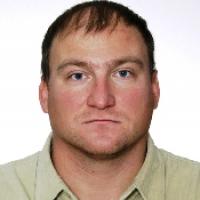 When and where did you begin this sport?
He took up the sport at age 31 in Surgut, Russian Federation.
Why this sport?
He wanted to prove to himself that he could become a Paralympic champion.
Club / Team
Ugra Adaptive Sports Centre: Russia
Name of coach
Valery Prokhorov [personal], RUS, from 2003

He was the flag bearer for Russia at the opening ceremonies of the 2008 and 2012 Paralympic Games, as well as the 2015 IWAS [International Wheelchair and Amputee Sports Federation] World Games in Sochi, Russian Federation. (sovsport.ru, 30 Aug 2012; ugra-news.ru, 01 Oct 2015)

He holds the title of Honoured Master of Sport in the Russian Federation. (minsport.gov.ru, 30 Dec 2019)
Other sports
He played volleyball at elite level in the Russian Federation before his accident. (strana39.ru, 17 Dec 2015; ugrainform.ru, 19 Jan 2012)
Impairment
His left leg was amputated as a result of an accident in 2002. (Athlete, 23 Apr 2012; strana39.ru, 17 Dec 2015)
Other information
ASHAPATOV CENTRE
In September 2014, a centre of sports preparation and rehabilitation named after him was opened in Surgut, Russian Federation. Training in the centre became available for everyone in the city, for both able-bodied people and persons with an impairment. (ugra-news.ru, 05 Sep 2014; ashapatov.ru, 23 Sep 2014)