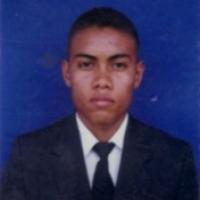 When and where did you begin this sport?
He took up Para powerlifting in 2011.
Why this sport?
He was spotted by a Colombian Para powerlifter and was invited to compete in the sport.
Club / Team
Bogota: Colombia
Name of coach
Jorge Chavez [national]
Training Regime
He trains at the High Performance Centre of Bogota in Colombia.

Most influential person in career
His mother Amalia and his sister Irina. (senalcolombia.tv, 24 Nov 2015)
Impairment
In 2004 he stepped on a mine during a combat operation in Colombia. He lost one of his legs and his left eye. The explosion also affected the hearing in his right ear. (senalcolombia.tv, 24 Nov 2015)
Other information
MILITARY MAN
It was his childhood dream to be a marine and he enlisted in the Colombian army in 2001. He took on office duties after losing one of his legs during a combat operation in 2004, before leaving the army in 2007. "I was in love with the military forces. It was always my dream. It never crossed my mind I would get hurt or hurt another human being. Military life is very good. If they had let me continue [with one leg], I would still be with my comrades [on the field]." (senalcolombia.tv, 24 Nov 2015; eltiempo.com, 22 Oct 2015)