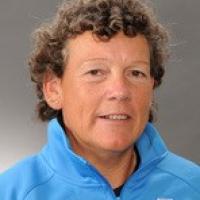 When and where did you begin this sport?
She took up para-athletics in 2011.
Why this sport?
She was an elite athlete before surgery led to her spinal cord injury in the early 1990s. She initially struggled with depression, but sports helped her get through it. After starting with wheelchair basketball and rowing, a coach suggested she try shot put in 2011. "At first, I did it to survive. Now, I do it to thrive."

Hobbies
Surfing [she surfs on her knees]. (Facebook page, 22 Jun 2015)
Most influential person in career
Her wife Debra Moeller. (Athlete, 26 Aug 2012)
Injuries
She experienced a grade two separation, rotator cuff tears, fraying and bursitis in her shoulder in 2011. (Athlete, 08 Jul 2012)

In 1979 she ruptured two discs in her back playing basketball. It was this that led to the 1993 surgery in which her spine would be injured. (sacbee.com, 16 Aug 2012)
Sporting philosophy / motto
"To inspire, motivate and effect positive changes in the lives of those who are born 'differently abled' and those who suffer serious trauma to their lives." (usparalympics.org, 18 Oct 2011)
Awards and honours
She received an Athletes in Excellence Award from the Foundation for Global Sports Development in 2014. (prweb.com, 17 Nov 2014)

She was the recipient of the Amateur Athletic Foundation's Women Who Inspire Us award in February 2003. (usparalympics.org, 18 Oct 2011)

In 2003 she was the presented with the Leo Reilly Jr Award for outstanding spirit and determination. (usparalympics.org, 18 Oct 2011)
Other sports
She has competed in wheelchair basketball, surfing, rowing and ocean rowing. She and crewmate Scott Brown won four consecutive world titles in mixed double sculls rowing from 2003-06. She also competed at the 2006 World Surfing Championships. (usparalympics.org, 18 Oct 2011)
Impairment
The impairment to her spinal cord is the result of a medical error while undergoing back surgery in 1993. She required the operation for an injury she had sustained while playing basketball during her time serving in US Marines. Her injury is designated as a spinal cord injury L1 incomplete. She has also had a bilateral mastectomy for breast cancer, surgery for carpal tunnel syndrome and been diagnosed with myasthenia gravis, which causes muscle weakness. (rowoflife.com, 10 Feb 2011)
Other information
ROWING ACROSS OCEANS
She was the first female para-athlete to row across two oceans, and has been part of a number of Guinness World Record ocean rowing crews. In 2009 she rowed across the Indian Ocean from Geraldton, WA, Australia to Mauritius, covering 3,600 miles as part of a crew of eight that took 58 days to achieve the feat. A year earlier she rowed across the Atlantic Ocean with Frenchman Franck Festor, an amputee, covering 2,552 miles from the Canary Islands to Antigua as part of a race of 22 boats. They finished eighth in the pairs class, and were the only para-athletes in the race. In 2010 she was part of a four-women crew who circumnavigated Great Britain, covering 2,010 miles non stop and unsupported in 51 days. In May 2014, she and New Zealand rower Tara Remington rowed 2,560 miles from Long Beach, CA, United States of America, to Honolulu, HI, in a 60-day journey to honour servicemen and women who had lost their lives. She also founded the California Adaptive Rowing Program, and the Row of Life foundation. (prweb.com, 17 Nov 2014; rowoflife.com, 2014; usparalympics.org, 18 Oct 2011; oceanrowing.com, 2010)

HOMELESS TO HERO
After sustaining her back injury while playing basketball in the military, surgeons mistakenly removed the wrong disc in her back, which resulted in paraplegia. Following a dispute with the military, who did not want to pay her medical bills, she lost her house, and in addition her husband left her. She was homeless and using the storage facilities at Disneyland to store her possessions, as well as suffering from depression. But after attending the National Veterans Games she discovered wheelchair basketball, and slowly began to rediscover a passion for life. However, she still battled depression, and it was not until several years later after she fell onto subway tracks in San Francisco and feared she had broken her neck that she says she truly began to appreciate what she had in life, and stopped mourning the former life she had lost. It was after this moment that she got into adaptive rowing, and began her world-record setting journey into ocean rowing. (spinalpedia.com, 01 May 2015)

COMING OUT
She revealed publicly that she was gay in 1981, after serving for several years in the military police with the US Marine Corp, in an era when US servicemen and women were routinely discharged because of their sexuality. "Because I was military police, my commander tried to enlist me to do the witch hunt and report other gays and lesbians. It was ridiculous and stupid. I didn't cooperate, which hurt any chance I might have had for advancement. Everybody was hiding. Everyone was afraid someone would out you." (signaltribunenewspaper.com, 15 May 2015; blogs.presstelegram.com, 11 May 2015)

PUBLIC WARNING
In June 2012 she received a public warning from the United States Anti-Doping Agency [USADA], due to her testing positive for fentanyl while participating at the 2012 Desert Challenge in Mesa, AZ, United States of America. She was forced to forfeit any medals, points and prizes she had obtained from 19 May 2012 to 22 June 2012. She avoided further disciplinary action as she was granted a therapeutic use exemption [TUE] from USADA after the fact, which proved she was using the substance for medical reasons. (usada.org, 22 Jun 2012) 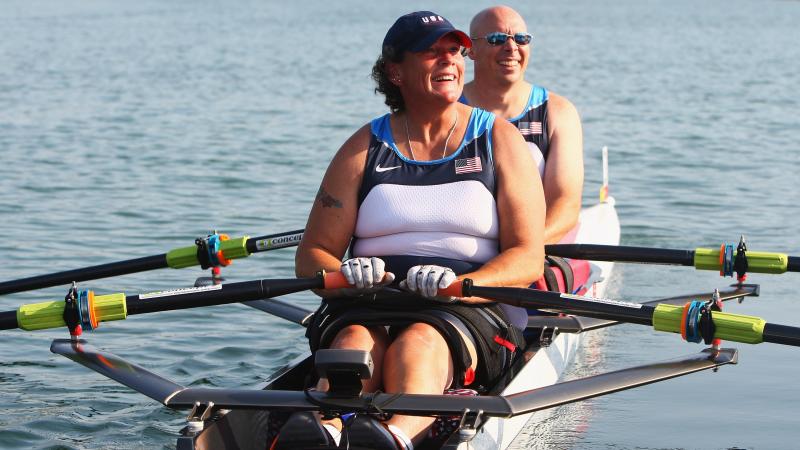