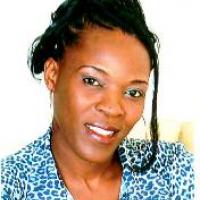 When and where did you begin this sport?
She began in 2002, in Essex, after giving birth to her son Timothy.
Why this sport?
"I came to this country and then I had my child, and I was putting on so much weight so I said to my husband 'I need to lose some weight', you know I wanted to get back to being a size eight and found myself on the track, they got me the fast chair and I started pushing."
Club / Team
Harlow Running Club: Harlow, ENG
Name of coach
Ken Day, Jenny Archer, Alan Stevens
Training Regime
Her usual training week consists of two days with two sessions, usually on the track and in the gym, and the rest featuring a mixture of road, track and gym, depending on her schedule. "My track sessions usually last between one and a half to two hours. I spend some time on the rollers and sometime in the gym. I also spend a fair amount of time on the road."

Kenyan Sports Personality of the Year in 2004. (inspirationalspeakers.co.uk 11 Sep 2011; annestrike.org 17 Sep 2011)
Other information
2012 CLASSIFICATION PROBLEMS
When she made her international debut back in 2004 she was classed as T53 [athletes who have restricted movement in their abdominals]. She was one of the strongest racers in that class. In 2006 the International Paralympic Committee reclassified her to her current class of T54 [an athlete who is completely functional from the waist up]. In 2008 she was sent for a medical assessment at the Royal National Orthopaedic Hospital which was undertaken by Dr Joseph Cowen. He said ""The amount of activity seen in the muscles is not likely to give her useful strength in the trunk in my opinion. I would therefore regard her as paralysed below T7." As of May 2011 it was uncertain if she would be reclassified for the 2012 London Paralympics. (insideworldparasport.biz 03 May 2011)

KENYA TO GREAT BRITAIN
She made her international debut for Kenya back in 2004 at the Summer Olympics. Anne decided to take British citizenship in 2006 and made herself available to compete for Team GB. Anne states her reason for switching Kenya for Great Britain was so she could stay with her husband and son in Essex. (insideworldparasport.biz 03 May 2011)

DISABILITY
At the age of two she contracted polio, completely paralysing her; she was saved by her village when they placed a tube into her lungs and breathed into it for 24 hours. Her father took her to the local hospital where she was diagnosed. "My father was advised by his friends to send me away to relatives in the bush where I could be hidden away. This happened to hundreds of children because of the stigma attached to disability. It was considered a shameful thing and a curse from God." (insideworldparasport.biz 03 May 2011)