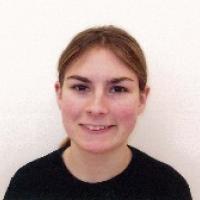 When and where did you begin this sport?
After her family moved to Saint Charles, MO, in 2004, she became involved there with the Disabled Athletes Sports Association [DASA]. Kelly Behlmann, founder of DASA, was her physical therapist and encouraged her into sports immediately.

Hobbies
Swimming, scuba diving, rock climbing, parasailing. (stltoday.com, 21 Jul 2009)
Awards and honours
She is a three-time Spirit of Excellence Award winner for field in 2009, track in 2010, and for swimming in 2012. The award is given by Wheelchair and Ambulatory Sports USA. (wsusa.org, 2012)
Other sports
She has competed in track, field, swimming and archery at national junior disability championship level in the United States. (stltoday.com, 21 Jul 2009; wsusa.org, 2012)
Ambitions
Professionally she wants to become a doctor, just like her neurologist at St. Louis Children's Hospital who also has cerebral palsy. "It's really cool that she is my doctor because she knows what we go through." (stltoday.com, 21 Jul 2009)
Impairment
A day after she was born, doctors discovered a blood clot in the base of her brain, causing a stroke that disrupted blood flow to 85% of its left side. The effects mean she has no control over her right arm and leg, which are smaller than the left side. As she grew, her parents took her to hippotherapy [therapeutic horse riding] which helped build muscle stability and strength. "She would fall asleep on the horse," said her mother Shannon. "It really makes a difference." (stltoday.com, 21 Jul 2009)
Other information
FAMILY SUPPORT
Her parents, Scott and Shannon, say they avoided raising her in a "protective bubble", preferring to let her adapt independently to her condition alongside her sisters Alexis and Vanessa. They say they were surprised at how quickly she figured out how to do everyday tasks. By age six, she could tie a shoelace with one hand, and when she does archery she uses her mouth to draw back the string. She also enjoys activities such as rock climbing and parasailing. (stltoday.com, 21 Jul 2009)